I have to interrupt my January ritual with seed catalogs with a quick announcement:  It’s almost spring!

And with that overenthusiastic proclamation, I am probably invoking the wrath of the consequence gods who I fear will deeply roar, “Not so fast, Grasshopper” and cover us with a deep chill like they’re getting in the rest of the country.

But hey, I have evidence. 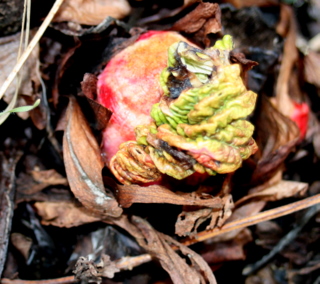 For one thing, the temperatures here in the far northwest corner of the contiguous United States have been above 50!

And in case you can’t tell, these are the deep ruby lips of a rhubarb bud, and they just make me pucker up thinking about them!

In fact, I got so excited when I saw these, I quickly dug out the quackgrass, fennel, and morning glory that threatened to choke them out of existence last year, divided the massive root stalk, and spread them out over even more ground.

Last summer I spotted a patch of rhubarb that was a whole corner of a city block, and it was a dramatic site to behold! Drama is good in the garden. “I want what they’re having,” I said to myself. Stay tuned for that.

And for the next piece of evidence: 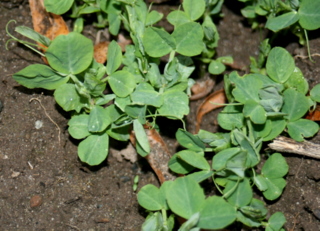 And here was the revelation: I might plant peas 3 different times before I get them to grow. The first time, I am ambitious and they invariably rot in the cold wet soil. The second time, either they rot or are eaten by birds and voles (or something). And the 3rd try usually means I get some plants, but by the time they mature, the temperatures are hot, and they get tough and dry.

But now look – I do absolutely nothing – in fact, I do less than nothing – I neglect even picking them until they shatter and spread themselves around – oh, maybe I go and turn over the soil so the weeds don’t completely take over – and then there you go – perfect spring peas, doing their own thing, without any help, pre-sprouting, innoculation, close-to-the-ground coaching, or whatever whatsoever.

There’s only a little problem with all this, and that is that I planted two kinds of peas last year, thinking that with different maturation dates and with succession planting (yes, there was a method to this madness), I would get a long season of wonderful sweet peas at the table, which is the theory we usually go by, right?

One variety was a snow-pea type and the other was some kind of sugar snap – thicker walls, but still completely edible. Both were leftovers from previous years; both still managed to sprout and grow; neither matured according to the package labels; and while the snow pea type was tender & sweet if I picked them early enough, the sugar-snap variety was tough and stringy and really only good if I let them mature enough to shell them.

They both pretty much grew out of control and tangled themselves together, so it was pretty hard to tell which was which unless I took a bite out of each one, which I often found myself doing.

Ahm. In other words, I don’t have a clue what kinds of peas are coming up – but right now, I think they’re the best peas ever!

So, yes, I realize technically we’re not even half way through winter. And although I celebrate the equinoxes and solstices (in moderation, of course), those seasonal divisions do not matter to me, because what matters is that I can go out in my garden and see the first shoots of daffodils, and I know that as soon as the rest of the country starts melting, it will be a very short fuse until spring is bursting out all over.

Rain, rain, rain here – it gets old, but we have our bright moments.

And for the rest of you encased in ice or buried in a snowbank, hang in there! Spring isn’t too far behind!