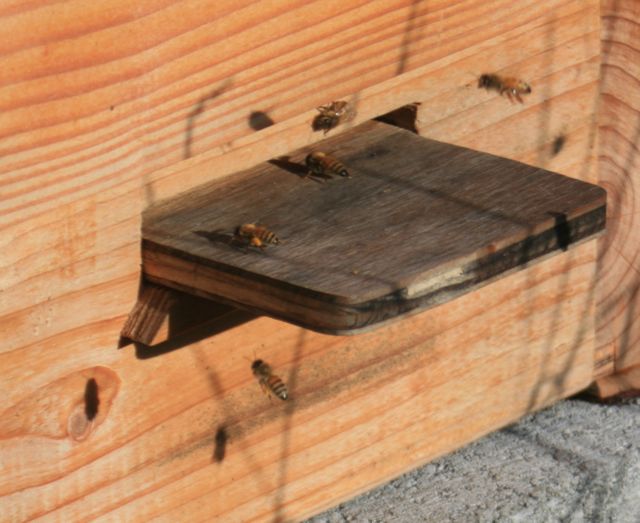 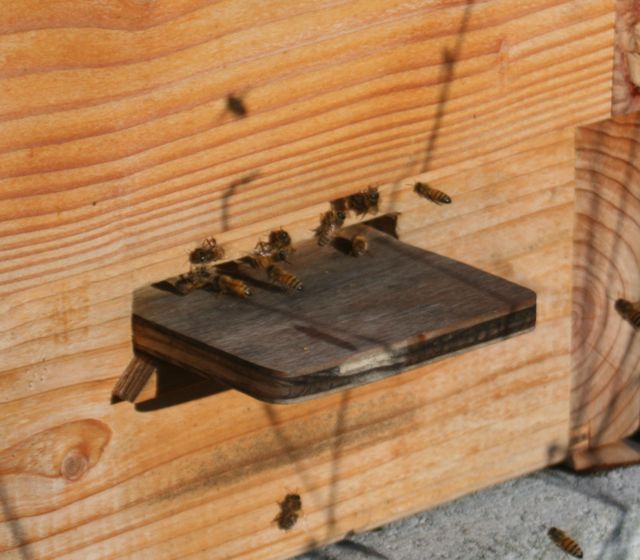 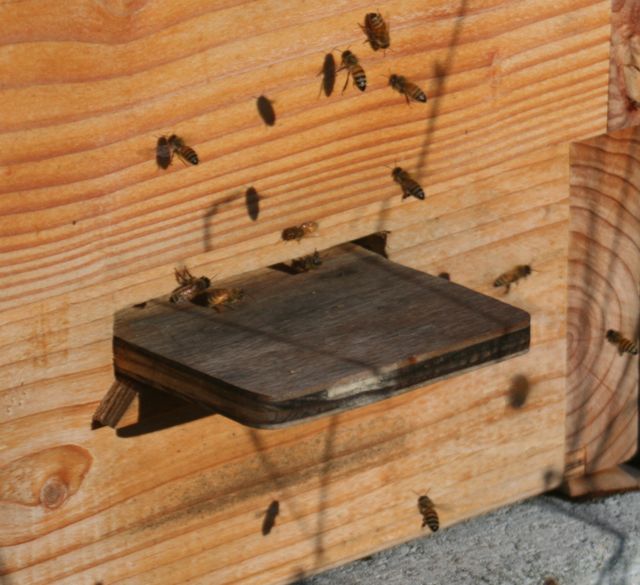 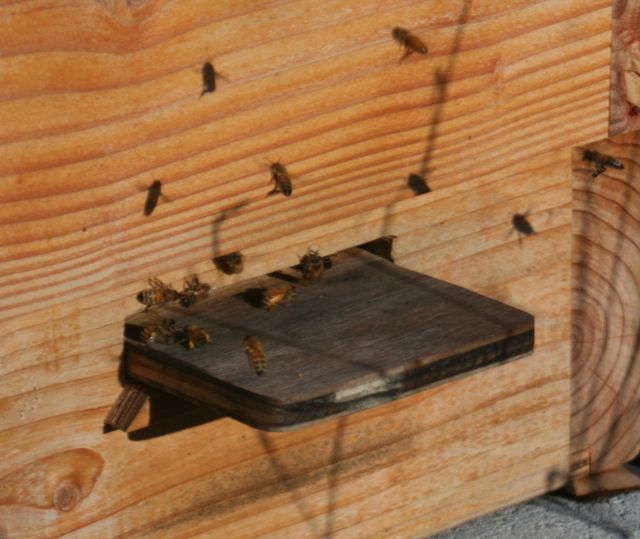 What Joy! The honeybees are out and about!  They seem to be enjoying this break between rainstorms in early December. Such a beautiful afternoon warming the outside of the hives; you can almost feel their excitement at such a sunny day.

But look closely! Some are actually finding pollen! But where?  I have some brassica and mustard family plants still blooming – also a few calendula – but not many; the asters and borage are pretty much gone at this point. The sunflowers look worn out and droopy, and the birds have taken most of the seeds.  There are plenty of snowberries on the borders of the fields, but I don’t see bees on them. Perhaps in the cedars, firs, and pines?

I recently built a long bed that borders the front area of the hives and filled it full of crocus bulbs so they will have something nearby in early spring. I left to grow all the young sprouts of kale and salad greens that started from scattered seed, so perhaps come spring, they, too, will bolt into early flower. I also planted an assortment of beeplants in nearby beds – heather, catmints, assorted herbs, sedums, lupine, and more – but they are not large enough to provide anything of substance yet.  I transplanted comfrey roots within close flying distance – but again, it’s just a dark slimy mass right now…

I am so relieved to see “my girls” emerge. I had thought I had lost the swarm I had captured in April – but lo and behold! They seem even stronger now than my original hive! I have not wanted to take the roofs off their homes and let valuable heat escape to see how they were doing, but my curiosity was killing me! Earlier in the year, they were not forming a lot of comb, and I was quite concerned.

Ok – so now we know they’re in there – and the colonies appear to be quite vibrant. Question is – can they make it???

Follow up questions: Should I feed them – and if so, when? Everything I read seems to give conflicting advice. “It all depends…” – not a good answer for a newbie bee guardian! If I give them food now, will it deceive them into thinking there is more available than there is?

Common sense tells me to let them be bees. Let them eat their own stores at this point (which are more nutritious than sugar water) or to forage for what they can find (which they seem to be doing very well without my help, thank you). After all, it has not yet been that cold.

However, my mothering instinct tells me to provide a backup plan. I have an extra box with a landing zone, so I placed some sugar syrup in jars inside, knowing it is not their preferred food, and placed it between the two hives, so bees from either one can go in if they get hungry. I have not seen a single bee enter. They must know it’s there.

In addition, I have hard candy for winter emergencies – they are already made in blocks that fit perfectly over the top bars inside the hives.

But I don’t think we’re there yet.

And so I wait. It is difficult, this waiting. The forecast is for heavy snow in the mountains; there is a good chance some will creep down into the lowlands. The wind is starting to pick up. It is December, after all – and it only gets worse in January and February.

I love how the bees take care of one another. For now, I place my trust in that.

I am standing by.