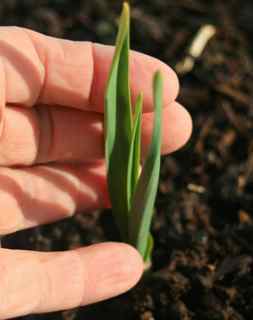 Status report: Mid-February and the garlic is up and growing strong!

I am doing a few things differently this year than last. Most notably: NO mulch. No mulch whatsoever.

Don’t get me wrong. Mulch can be a good thing. But it has its time and place. Around the garlic, as we witnessed in last year’s disaster, is NOT always good.

It might be ok for where you are. If you get Siberian-like winters that have been hammering the Great Lakes states and the Northeast, I would think mulch would be very protective, if not essential. Here in the Pacific Northwest, though, we have a different challenge: down-pouring rains, alternating freezes, and temperatures that get low, but not low enough to kill insects or hardy weeds. In fact, the insects just hunker down; the weeds never sleep.

Ok, so hay might not have been the best choice for mulch last year – sometimes availability influences that decision – but any mulch around here is going to hold in the cold and damp, and any garlic bulb beneath the mulch is going to have a losing battle with molds and fungi. That is a lesson I have learned the hard way (unfortunately) more than once!

I keep debating this whole mulch thing because I really like the concept of no-till gardening methods. I have been a fan of Ruth Stout since the early 70s (The Ruth Stout No-Work Garden Book: Secrets of the Famous Year-Round Mulch Method

– my copy is tattered with use), however, strongly warns against such practices that worked well for Ruth in Connecticut, but spell catastrophe in our climate. The mulch provides a cozy haven for pill bugs, earwigs, and slugs – all of which are quite prolific in my garden, but don’t bother the garlic much. (Note to self: plant garlic next to things that ARE attacked by those pests!)

My friends may wonder why, then, against all logic, am I converting our backyard into a recycling center for cardboard, newspaper, and bark. You can’t believe how much I hate grass, but I’ll save that for another post.

The truth is, after all these years, I am changing my approach to gardening. Gardening is, after all, a learn-as-you-grow game, and hopefully you get to keep growing a very long time!

Still, failure hurts. I am still reeling from last year. Course, it was a rough year. We got hit with nearly 17 inches of rain in October and November alone, which was nearly 70% of the rainfall for the entire year. Many areas reported their second wettest November on record. Wind gusts frequently topped 40 mph. Temperatures hit record lows in early December, with no snowfall for protection. They finally climbed up to 60 in April, but never hit 70 until June. We had a hot dry spell in July and August when temperatures topped 85, but even so, the average maximum temperature never even hit 70 all year long.

2011, however, is a new year, a new story. We’ve only had about half as much rain (8.5″) since October. We haven’t had near the flooding. Yes, we got hit with some heavy wet snow that paralyzed Seattle and knocked the power out of a lot of communities, but overall, it’s been tropical compared to what the Midwest and Northeast have been dealing with.

The garlic bulbs have endured steady fluctuations in freezing and thawing but have persevered. I have resisted the mother-hen impulse to cover them up, reminding myself that these are plants that grow in Siberia. Surface weeds have taken advantage of bare ground, but they easily pull up when it thaws in the afternoons, and have not been life-threatening.

When it comes down to it, every year is a horticultural experiment. We will always have wet winters with occasional deep freezes. Heavy wet snow is the only kind we ever get. We start taking our clothes off if the temps top 70; our summers may be drought-like, but they generally remain cool. The wind is always gonna blow, making keeping on top of the watering and evaporation rates a bit of a challenge. You can do your best to build the soil and keep up with the weeds, you can record the weather stats and track the storm systems coming in off the coast, you can apply mulch to get through the dry times and most definitely take it off during the wet, but still, all such experiments entail a certain amount of risk, as well as a learning opportunity, whether through success or failure, that can’t be achieved any other way. Books won’t do it. They can give you guidelines, but when it comes to garlic, or gardening, for that matter, “gardeners must dance with feedback, play with results, turn as they learn.” (Michael P. Garofalo, “Pulling Onions.”)

So – seeing these new garlic sprouts gives me a sense of pride and joy. I have been growing garlic for – jeesh – almost 35 years, but every year, I look at my little sprouts coming up in mid-winter with utter amazement. The Siberian Purple Stripes pictured here have always been an outstanding performer for me. They look so determined. So orderly in their rows. United in their desire to thrive. And as we all bask together in this afternoon sunshine (see how the dark soil holds the heat! no mulch to keep in the cold!), I can’t help but think that they are that much more resilient for the hardships. I marvel at how completely one with nature they are, understanding with their entire being the subtle changes in light and shadow as the sun moves across the sky; and my, how they almost glow with the inner sense of a coming spring!

Sitting in my garlic patch, I can feel it. It’s going to be a good year.

But we have a forecast for snow and temps in the 20s.

Cover them up? Nope.

Resist the need to control. Give them credit for the strong plants they are. Pay attention. Learn. Don’t mess with nature.

2 thoughts on “Garlic is UP! and Much about Mulch”