In this section, we visit additional factors that might have an influence on garden and systems planning: zoning and legal issues, noise and air pollution, fire hazards, views, resources (or lack thereof): the pros, the cons, and what it all might mean.

As noted in the description of Topography, Soils, and Land Use, Barbolian Fields and much of the surrounding properties are in “Critical Aquifer Recharge Areas,” which is a designation under the Growth Management Act for the purpose of preventing pollution, protecting drinking water supplies, and recharging the groundwater table. Clallam County “Critical Area” regulations state “A Critical Recharge Area is one where the aquifer being recharged (with rainwater, snowmelt and other surface sources of water) is used for drinking and is susceptible to contamination that could affect the ability of the water to be safe to drink (WAC 365-190-030). Additional development standards may be required when developing the property.”

Section 27.12.615 Performance Standards for Certain Development Activities outlines rules for specific activities for which a certificate of compliance is required. Some of these uses include the following:

Noise pollution is somewhat of an issue at Barbolian Fields, although nothing compared with what many people deal with. Woodcock Road, running along the southern edge, is a secondary main road that connects east and west. It is long and straight with no stop signs and few side road intersections. Drivers tend to use this road as a place to speed from one end to the next and escape the congestion on the main road. We have planted shrubs along this side to buffer some of the noise and also built a 4-ft fence along part of that area, which is high enough to dampen the road rush but short enough not to block mountain views. An unexpected benefit of this fence is that the birds absolutely love it. They will often be lined up along its edge, waiting to take turns at the bird feeder.

Barbolian Fields is located in a near pristine area between the mountains and the sea. It has some of the best air on the planet. The nearest industrial complexes are in Port Townsend and Port Angeles. The predominant winds are from the west, which is relatively unpopulated. In fact, the air in Sequim Bay is sometimes used as a reference point for monitoring air quality in other areas.

Barbolian Fields is in a low fire hazard area; however, with only 13” or so of rain a year, 75% of which falls between October and March, the months of July through September can be extremely dry, especially with the trend toward warmer summers. Every year there are times when local fire districts issue burning bans. A potential hazard exists in neighboring fields to the north and east that are currently used for grazing cattle and raising grass hay. In particular, on the far north side is a housing development; if anyone in this area were to have an outdoor burn or be careless with fire, the winds could unexpectedly come up and quickly carry a blaze across the field and be at our back door in a matter of moments. For protection, we have planted trees along that north side, have garden areas that are watered and mulched, and keep our field either mowed (grassy recreational area) or scythed (for mulch harvest) to reduce such hazards. 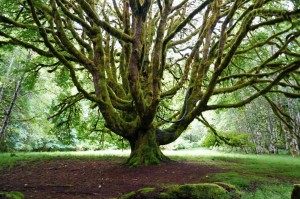 Views – the good and the unknown

Protecting the mountain views to the south and southwest has been a bit problematic in planning the gardens at Barbolian Fields. For example, it would be desirable to plant a windbreak on the west side; however, trees and shrubs are likely to b

lock views of the Olympics and sunsets. Several types of basketry willows and willow sculptures were planted on the northern half of the 6-plot garden; these grew much taller than expected and are currently blocking views from windows in the barn (which is actually more of a workshop). The more the various shrubs and canopy layer trees grow, the narrower the view to the mountains, depending on where one is at on the property.

On the flip side, to the north are views that eventually might want to be blocked. Currently, it is a large field, part of an old homestead comprising some 30 acres that are leased for grazing cattle and raising grass/alfalfa hay and that, as noted above, could present a potential fire hazard if someone were not mindful of an outdoor burn. The owner was quite elderly and passed away a couple of years ago; the descendants are still deciding what to do with the land – some would prefer to keep it in farmland; others would prefer to sell it and make profits. This is of particular concern to us, as we have watched parcels of land all around us divided up into housing units. In anticipation of this scenario, in 2010 we took advantage of a bare-root native plant sale through the Clallam County Conservation District and planted a row of cedars and firs along the fenceline to block the view of any future subdivision. In 2011, we again purchased bundles of native plants – this time, shrubs of salal, mahonia, mock orange, serviceberries, and flowering red currants. The shrubs are gaining in size; the trees, however, are slow growing.

The region is abundant with natural features, including nearby creeks and streams, the Dungeness and other rivers, the Strait of Juan de Fuca and the Pacific Ocean, and the forested lands of the Olympic Mountains and rainforest. Very few places have such a diversity of ecosystems out their backdoor. There are fish, shellfish, seaweeds, profuse wildflowers, wild edible plants, mushrooms, berries, woods, scenic beauty, recreational opportunities, and places to find solitude and inspiration. There are also mid-sized towns and larger cities within driving distance.

On the Barbolian Fields site itself, a major advantage is the irrigation ditch that runs along the east side of the property and for which we have water rights – and without which, garden irrigation would be a real problem! The water, however, is of unknown quality. Animal waste products are a given, and probably of little concern. However, it is difficult to say what amount or kinds of fertilizers might leach into the ditch along the way. One would like to think that not many people are using dangerous pesticides as it meanders through fields and backyards, but realistically, I see too many perfect lawns out there, and this summer, I noticed one of the beehives had a lot of dead bees outside the hive, indicating they probably got into something (although hard to say what or where). To reduce risk of contamination (and to reduce evaporation), some sections of the ditches are being piped; however, it is a controversial project as people are realizing that the ditch water has been instrumental in recharging the water table.