Topography, Soils, and Land Use 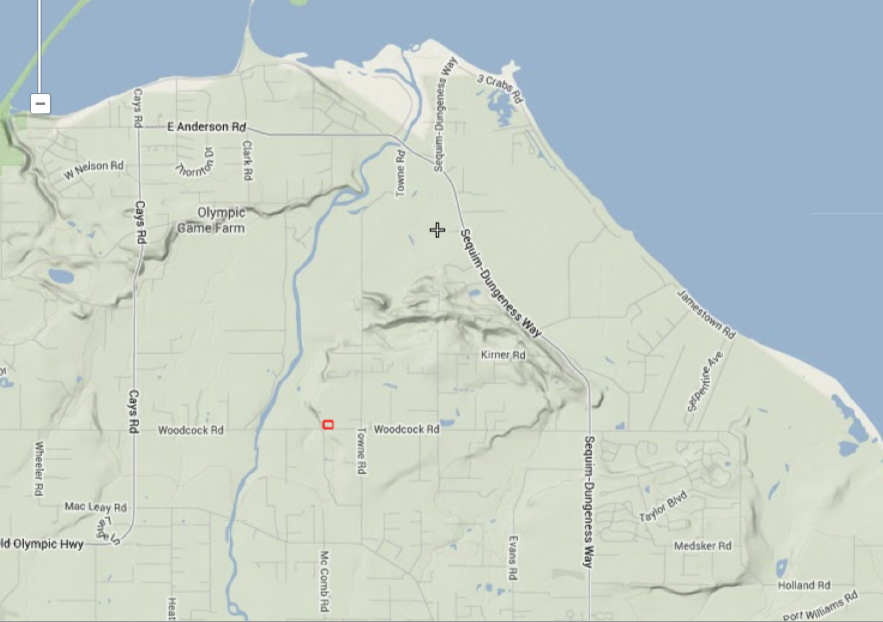 We talk about this simple 4-letter word in simple ways. It is the dirt beneath our feet. And yet, with closer inspection, we find it is quite possibly more complex than anything above that line of demarcation that separates the land from the sky.

If we delve into a geologist’s description of soil, we find we need to learn a different language. Soil is, on the onset, a combination of silt, clay, sand, and gravel – terms that can be used to describe texture, but certainly not life.

To identify our soils, we need to look at where they came from. As can be seen from the map, Barbolian Fields is located on the more-or-less flat plains bordering the Dungeness River just before it reaches the Strait of Juan de Fuca bordering Washington State. The Olympic Mountains to the south jut abruptly upward to nearly 8,000 feet. Unlike many mountains, the Olympics are not volcanic, but rather, were formed by tectonic plate movements in which one side shoved beneath another, pushing it upward. Most of the soils in the region have been formed by erosion of the steep ridges that formed as a consequence; the rivers are some of the steepest and swiftest on the planet. A mantel of both coarse and fine glacial deposits cover much of the lowlands. This glacial outwash, along with river terrace material, is the foundation for most of the soils in the area.

Many of the soils in the Sequim-Dungeness area are formed from alluvial deposits, those loose, unconsolidated sediments that have been eroded, reshaped, tossed about in water, and redeposited. Alluvium is typically made up of a variety of materials, including fine particles of silt and clay and larger particles of sand and gravel. 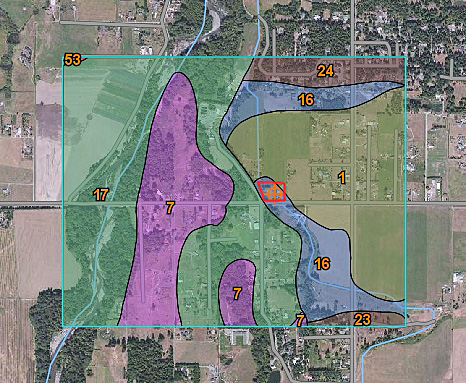 The more specific soil profile shows Barbolian Fields is mostly “Dick Loamy Sand” (#16) and the NE corner “Agnew Silt Loam” (#1).  The site is bordered by “Dungeness Silt Loam” (#17), and between the project site and the river is what is known as “Carlsborg-Dungeness Complex” (#7).

The US Department of Agriculture describes the “Dick Series” as soils that formed on the glacial outwash plains near sea level. They tend to be deep and “somewhat excessively drained” and have “rapid permeability.”

The Agnew Silt Loam soil (#1) is often categorized as Hoypus-Sequim-Agnew soil and is frequently found with the Dick soils. It is formed by glacial-marine sediments and is usually located at slightly higher elevations (50-400 feet) on terraces. This soil has a silty loam surface layer and a silty clay loam substrate. The Agnew Silt tends to be more poorly drained, less permeable, and wetter than the Dick soils, which tend to be more sandy.

In general, the regional “Carlsborg” series of soils consists of deep, well-drained (“somewhat excessively drained”) soils that were formed on old alluvial fans and river terraces. The surface layer tends to be gravelly sandy loam, so gravelly, in fact, that some areas are used as a source for sand and gravel.

The Dungeness Silt Loam is another series of soils formed in bottomlands and low river terraces, at low elevations (25 to 300 feet) with 0 to 5% slopes. It is often quite dry with a sandy loam or silty clay loam texture and a slightly acid-to-neutral pH. It is more suited to crops, but is limited by drought.

At the Barbolian Fields site, the soil pretty much matches the descriptions found in the USDA surveys. In my terms, it is slightly acidic to fairly neutral in pH, mostly sandy loam with clay streaks, and with areas (in the NE and SE corners, in particular) that have a whole lot of rocky gravel. I find that the greatest remedy to fixing both extremes of hardened clay chunks and gravelly areas that won’t hold water is to add compost, organic matter of all kinds, and mulch mulch mulch. After building my original 6 plots around which I rotated the garlic and green manure crops over several years, I have achieved a beautiful soil mix that is full of earthworms. The mulch on top readily shows the white threads of fungal mycelium. Yet, it is still amazing how diverse the soils can be on less than 2 acres. I still hit chunky clay areas that look like they would be good for making pottery; other areas are so rocky, a crowbar is needed to dig through it; much of the outer field is just compacted dirt (overgrazed?) that has had field grass and thistles sucking out all the nutrients over decades and probably centuries–it needs serious help before it can support anything other than invasive weeds.

Local Land Use, Crops, and the Local Economy:

Traditional land uses in this area, according to the USDA/NRCS and based on soil surveys and historical data, are homesites, irrigated cropland, and pasture. Principal crops are alfalfa and grass hay, raspberries, peas, oats, barley, corn silage, mint, alfalfa, and pasture grass.

Largely forested to the west, the land has also traditionally supported forestry and timber industries. The Sequim area has been predominantly agriculture (primarily dairy farms) before the influx of people and the transformation of flat, farmland to urban sprawl. Now the area is more tourism-focused, which has brought in much-needed income to the region. In particular, the local tourism association has promoted the growing of lavender, and we are now the self-proclaimed lavender capital of the U.S., rivaling that of Provence, France. With the lavender has grown an increased awareness of the importance of our agricultural roots and a local foods and artisan movement. In terms of agriculture, the area is ideal for growing all kinds of Mediterranean herbs, berries, and cool-season vegetables, such as broccoli, cabbage and other cole crops, salad greens, and the celebrated Nash’s carrots. Because of the region’s relative isolation, it is also a good area for seed crops. 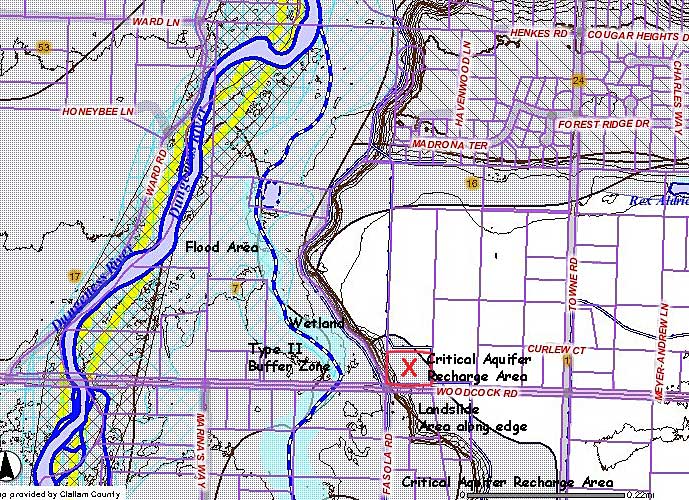 Several areas are designated on Clallam County land-use maps as flood zones (turquoise squares on either side of the Dungeness River), buffer zone areas (dark blue & white line), wetland areas (solid turquoise), and identified landslide areas (brown hatches). In addition, the area at Barbolian Fields and much of the surrounding properties are termed “Critical Aquifer Recharge Areas” (large grey dotted area), which is a designation under the Growth Management Act for the purpose of preventing pollution, protecting drinking water supplies, and recharging the groundwater table. Groundwater contamination is of particular concern in this area because of the proximity to Hurd Creek, the Dungeness River, and Dungeness Bay, and because of potential deleterious effects to protected salmon runs, sensitive shellfish beds, and other marine life. Non-point source pollution has, in fact, been identified through microbial source tracking studies as a serious threat to water quality. Some primary sources of fecal coliform bacteria have been regional cattle operations and the Olympic Game Farm, which is a farm for rescued lions, tigers, and bears (oh my!) and a host of other large game animals, such as reindeer, elk, and buffalo. The Game Farm is located just down the road from Barbolian Fields. In fact, in the early mornings and at sundown, one can often hear the lions roar and the wolves howl from the backyard. Although the Olympic Game Farm is a popular and unique attraction (they worked with Disney studios for nearly 30 years), it has become increasingly controversial. To their credit, the Olympic Game Farm has implemented best management practices in recent years to reduce contamination sources that might go directly into the river. 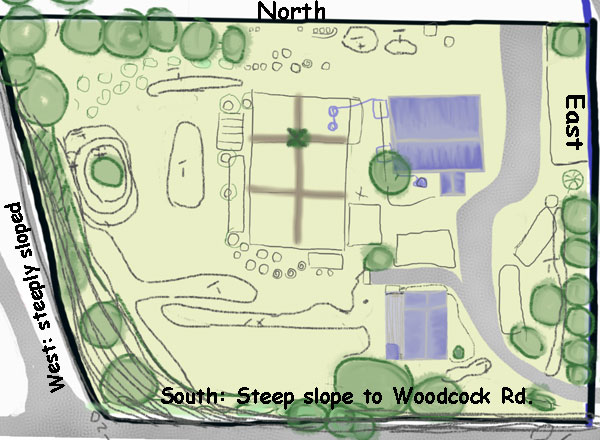 Contour map at Barbolian Fields: a rough sketch of steep slopes to the west and south; minor dips and mounds in other areas of the property.

The ground at Barbolian Fields is basically flat except on the southern and western edges, where it is bordered by steep hillsides identified as “landslide areas” on the county land-use maps. In truth, they vary from 10-20 feet in height and could be considered unstable under certain conditions (one would not, for example, want to run greywater along these borders); however, trees, Himalayan blackberries, and other groundcovers do a good job of holding the ground in place. Several poplar trees that have grown considerably taller in the last several years and are right on the edge of the southern boundary could be of some concern, however. On this southern side, the main access road (Woodcock Road) cuts deeply between the fields on either side. The neighbor’s field is approximately the same elevation as that at Barbolian Fields; coyotes and deer are often seen there. On the western side, the land drops abruptly to a neighbor’s driveway, further descends to Hurd Creek (and a side road that leads to a small fish hatchery), and continues descending more gradually to the Dungeness River.

Of course, even “flat” land is not necessarily flat, so even though Barbolian Fields looks relatively level, one can walk around the property and see numerous bumps and dips. On the west side is a mound where there is a pet cemetery (and where my mother’s ashes are buried). It is situated beneath an alder and looks out over neighboring farmland. Mole activity has made the outer field outright lumpy. A long mound extends westward from the deck where the drainfield is located. The elevation changes are not large enough to be mapped on available USGS topographic maps; the map at left was sketched by observation and estimation rather than by direct measurement. One can see, for example, that household greywater might be able to be routed through a ditch on the south side of the main gardens, where it could end in a pond that could be dug where the land starts to dip to the west. A low depression on the north side of the barn might be a good place to create another rain garden / pond that could catch the runoff from the roof of a greenhouse structure. Without a slope or contours, any swale-and-berm-type constructions would need to be built on relatively flat ground, which has posed a bit of a dilemma in the design process. For now, most ground modifications have been made through building assorted raised beds, rain and runoff gardens, and two small ponds. More of these are planned for the years ahead. An additional possibility might be to try to terrace the steep slope on the western edge of the property, which receives a lot of sun but is tangled thick with brambles and invasives—this would be for a future endeavor, after other projects with more immediate results are accomplished.

Methods being used to work with the topography, address soil issues, and increase soil structure and fertility at Barbolian Fields: