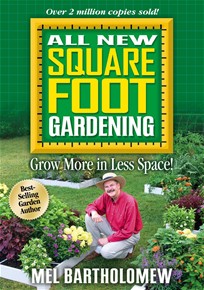 Like “Lasagna Gardening,” this is another book that I never got around to reading, because again, I thought I pretty much had the fundamentals down. Well, now we have the “All NEW” version, full of good advice and ideas – and I’m here to tell you it’s worth a look.

The basic idea is to build beds, mark out your space in square feet (or it’s not “square foot” gardening), and thickly fill in the space with plants.

The idea is not new, and over the years, it has taken on different forms – biodynamic, biointensive, calorie farming, French Intensive, etc.

As an aside, back in the 70s, “French Intensive” gardening was my mantra. As you might guess, this method is very intense, just like the French, just like their coffee. Intense planting, intense building of the soil, intense results – and a very intense workout getting there. Just drink a quadruple shot of ultra-dark-roasted mud and you are good to go. I was much younger then and in great shape – so the double-digging required to loosen the soil down 2 feet was “pas de probleme.” I dug little pathways between the beds and tossed the dirt into the growing area with great flair. I made neat rectangular mounds that would make any French person sincerely exclaim “Oooh la la!.” Plus, I had recently returned from a year in France on a student exchange program, so I thought I knew what I was doing.

My neighbor, an elderly farmer who had always grown things in long, single rows but mostly herded cattle, had never seen garden “beds,” much less heard of “companion planting.” When he came across my series of mounds, crowded with vegetation, he scratched his chin and tactfully expressed sympathy in that he thought maybe I had buried my dogs out back. Although now I better appreciate his country sense of humor, I also admit there is always something new you can learn – and that something over the years is that there’s gotta be an easier way.

For one, he doesn’t mess with digging up sod, double digging, moving soil from one end of the bed to the other to make room for tossing over the new stuff – none of that. He just lays down a ground barrier, builds a frame for the bed, mixes up a growing medium, and piles it inside. Map out your grid, plant as thickly as the plants will allow, watch them grow like crazy.

It doesn’t get much easier, and throughout the book, you gotta appreciate Mr. Bartholomew’s never-ending cheerfulness and enthusiasm that exudes in every chapter – along with his sense of irony, which makes the book very fun reading.

There are several other things in the Square Foot Gardening book I can appreciate: for one, Mr. Bartholomew is both a civil engineer and an efficiency expert. This explains so much. You have to admit that it doesn’t make sense to scatter a bunch of seed only to thin it out later – and who doesn’t waste lettuce and carrot seeds? Or how about the space you waste if you follow the directions on spacing between rows? In Bartholomew’s beds, there are no rows. You build a bed frame and you tend the garden from the sidelines. And you have to appreciate how he advocates growing enough for your own needs (and perhaps a little to share), but does not advocate methods created for the convenience of commercial farming, which could possibly feed all of humanity if large businesses felt so inclined, which, of course, they are not, and we won’t go there because that’s for a different rant.

But think about it. Our whole mentality of planting in long rows caters to the convenience of large farming practices, an industry that has literally grown up on large tracts of land, abundantly available in the U.S., and also on the abundant availability of cheap oil, which is already history. Gas at $4.00/gallon is making us all reconsider the wisdom of those practices that are just another example of America’s culture of waste.

In the words of Masanobu Fukuoka, the Japanese scientist and author of The One-Straw Revolution: An Introduction to Natural Farming

, who demonstrated on his own family farm that he could get comparable results as commercial enterprises simply by working “with” nature rather than against it:

“The food-growing situation may seem to be in good shape today, but that’s just an illusion based on the current availability of petroleum fuels. All the wheat, corn, and other crops that are produced on big American farms may be alive and growing, but they’re not products of real nature or real agriculture.
They’re manufactured rather than grown. The earth isn’t producing those things… petroleum is!”

Time to downsize, folks. Time to take lessons from around the world and efficiency experts such as Mel Bartholomew on how to make the most of our space, water, and other resources, and how to maximize our yields in the process.

So – it begs the question: If you aren’t rolling a combine across the back 40 or even a small tiller in your own little postage stamp on the planet, then how much space do you really need? How do you come to terms with that?

I confess, this is a real problem for me. I have my garden scattered across 15 different growing areas, depending on how you count them, and that doesn’t even include the orchard. Even though I am selling some of my crops, I definitely have room for efficiency. I am caught between being too small to be a big farmer; too large to be a small gardener.

Part of the answer, according to Mel, might be in looking at your garden in terms of individual square feet. How much, exactly, can you fit in a square foot? Turns out, a lot. And just how much space is required to grow all the veggies for a family of four if you stagger your plantings and grow things in 3-dimensional space where you can and throughout all the seasons…well, that depends, of course, but the final answer – not much!

The other big advantage to the Square Foot method is the reduction in labor. If all the space is filled up with plants you actually want, then there is no room for weeds, right? And if you start with a weed-free soil mix, you are 99% ahead of their game. I am currently on a warpath against weed domination and it is very apparent that to win, or at least to hold your ground, you just have to never give them a chance. Easier said than done.

I admit, when I first read this book, I thought, “That’s cool for someone with a small backyard or someone who just wants a little garden, but not very practical for me.” I am, after all, borderline-tenacious about my garden plots in which I have labored intensively (there’s that intense word again), and I’m not ready to give them up. My kids have often suggested that I should reduce my garden to a few raised beds, which they would happily build for me (trying to tactfully say that I have more than I can handle) – as if I’m some little old lady who just wants to putter in her petunias. (It’s just so interesting when your own kids start treating you like one of the elderly. Good grief.)

I mean, I’ve got over an acre of garden and I’m not about to go build a bunch of boxes and line them out in square-foot measurements (I mean, I understand the mentality, but is this not a bit anal?) and fill them with 1/3 peat (agh! there’s that recommendation for a nonrenewable resource again – and I don’t care how much you try to rationalize or justify it!), 1/3 vermiculite, and 1/3 purchased compost, (because c’mon, we all know the compost stuff I make is full of seeds and weeds because it just never gets quite hot enough to destroy them) – not to mention all the 2 x 6” boards & extra riff-raff required to tend to the plants’ individual needs, protect them against the elements, and provide whatever else they demand (now that they’ve become next of kin) – and even though some folks might be able to scrounge up this stuff for free, wishful thinking – reality is, many of us can’t.

Ok – so now we’re into some bucks for something clean and neat and orderly, which SO appeals to my husband, also of an engineering mindset. Me, of course, I’m more of a freestyle gardener.

The question, again, is: does this make sense to me?

Well, maybe not for my entire garden. But I have a little strawberry patch out back – it’s maybe 12’ x 24’ – and it’s always a pain in the you-know-what to weed, because it is full of quack grass and the god-forsaken-should-be-condemned-from-the-universe morning glory and wild blackberries. I am at the point where, you know, I hate to say this, but strawberry plants are relatively cheap. Maybe I should start over. Maybe I should just smother everything – it’s rather cruel, yes – but in looking at the bigger picture – just cover the entire area with several layers of cardboard, maybe some bark, and then maybe top it off with some fancy beds laid out in measured squares – orderly – in control – plant some new & improved strawberries and maybe a few salad greens and maybe some flowers to attract some bees – and, yes, maybe a few kitchen herbs – the kinds of things you want by your front door – perfect.