The official times for sunrise/sunset (with daylight savings time included to confuse the issue) throughout the equinox/solstice markers of the year:

But where is the sun throughout the day? How much sun can you expect to get? and how does the angle of the sun affect the solar intensity, amount of energy, and degree of shadows across the site?

The University of Oregon Solar Radiation Monitoring Laboratory provides a nifty tool for plugging in your coordinates or zip code to get where the sun is in your particular location at any time of day or year — instantly. I wrote about this in my blogpost “Tracking the Sun” in March 2012. 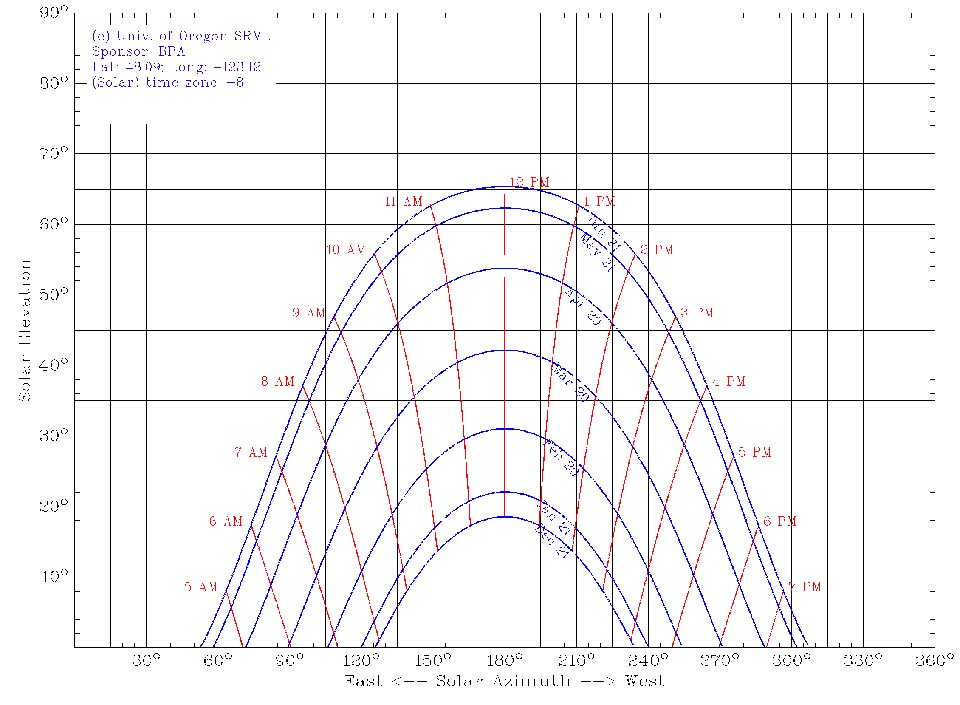 Sun Earth Tools is another cool website to help you track the sun and that will generate pictures and charts like the following:

You can also download this perspective (also from SunEarthTools.com)

The dates and times of the sunrises and sunsets throughout the year only tell part of the story, however.

Sometimes, the only real way to see where the sun is at and how various trees and structures influence the light and shadows in the surroundings is to go out and take a look.

I did this for an entire year (actually, more). There were some surprises:

In the winter, one would expect the plants on the east side of the house to appreciate the warmth of the morning sun; however, the sun hardly reaches the eastern side. In fact, it never gets above the neighbor’s trees until past noon, by which time it is on the other side of the house. At this point, it is still so low in the sky, that it is but a short distance before it disappears behind the Olympic Mountains, quite a bit before the designated sunset time. Also, when the sun is low in the sky, the shadows are much longer. Obviously true – but until you get out and look, you might not realize how much.

In the summer, the sun almost appears to rise in the Northeast and set in the Northwest, the arc across the property is so broad. By taking a look at the above graphs, you can see how this is true. Although it can be quite intense in the south and west on summer afternoons, the western side of the house (which is where I placed the tomatoes, to take advantage of that afternoon sunshine) never quite gets the heat because it is shaded by deciduous trees to the south and west. The later in the year it gets, the longer the shadows from these trees. 2014 was a great year for tomatoes, but not on the west side of our deck. Just sayin’.

It is amazing how quickly the available light changes throughout the year! At this latitude, we go from approximately 8 1/2 hours of daylight to over 16 and back again. I grew up in Alaska, so it doesn’t seem like that big of a deal…until you plan a garden and think about how to capture some of that energy. In addition, because we are so coastal, we have a lot of humidity, particularly in the summer. We don’t see the stars at night that many people in other areas outside of cities do. In the winter, though, the mountains across the Strait are crystal clear. Clouds move in and out again with passing winds, as does enough moisture to see visible drizzle but not collect anything measurable. It was sometimes difficult to take readings of sun and shadows at the same times (roughly every 2 hours throughout the day) on the 21st of each month to coincide with the solstice and equinox; therefore, comparisons of data in this highly unscientific study are rather subjective, but still paint a picture of change.

Early observations were noted in a notebook, but later I got a little more sophisticated and drew the shadows in an iPad Procreate application that has the features of being able to import a Google map of the property and then draw over it in a series of layers. Here are some of the best for comparison: