A Case of March Madness 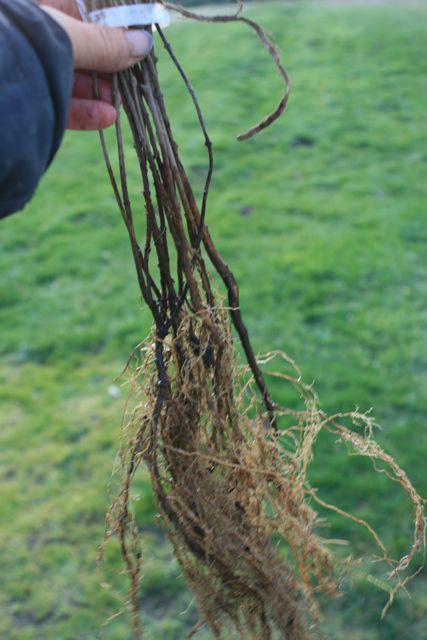 Bare-root mock orange (Philadelphus lewisii) is a native plant that will fill the air with the heavy scent of oranges with a hint of pineapple, a magnet for birds, bees, and butterflies. Not only that, but the bark and leaves contain saponins, which, mixed with water, make a gentle natural soap! All that from these little twigs??? Amazing plants! Ten is clearly not too many!

We leaped (leapt?) over the last of February and are now smack in the middle of the madness of March. We go from howling winds and swirling snowflakes on one day to almost balmy (loosely defined) the next. Despite our weather ups and downs, though, it’s far worse in many other parts of the country – and even the world. So no complaining. (When it hangs on like this through July – ok, then we have a right to complain.) Those days when the temps vary a mere 5 degrees or so night and day for days on end can really get to a person, though. That’s when the doldrums set in. And as someone who likes to play the blues, I know all about doldrums and stormy Mondays.

I have a solution for the doldrums, however. You buy plants, of course.

Oh, I know – all the garden blogs at this time of year are proselytizing on the virtues of taking inventory of your seeds and testing viability. You make a list of exactly what you need, and then, like anyone who has tried various diets and won the weight battle, you simply stick to the list.

No, taking inventory just doesn’t satisfy that deep need all of us true gardeners have right now.

We need to grow things.

We need to see things turn to green and flower profusely.

It’s not about restriction – it’s about cutting loose! It’s about having a vision and believing you can make it happen. Gardeners are, after all, some of the world’s greatest visionaries. But the key is to not let the vision control the reality, for even visions can be restrictive. It’s about allowing serendipity to be part of the equation. It’s about embracing change and the ability to shape, not control. But lest I digress….

After all, there is no time to lose. Nature doesn’t pay attention to calendar numbers, and despite the stormy Mondays (and Tuesdays can be just as bad), March, as we all know in the Pacific Northwest, is the unofficial beginning of spring. Things are already budding out.

And so, in that spirit of bringing my vision to fruition, and in my heroic effort to combat a serious case of doldrums, and in my Zen state of being open to allowing things to happen … I did what any self-respecting gardener would do: I went shopping for plants.

You can spend a lot of time online, that place “out there” where botanical wonders are in full color and detailed descriptions are at your fingertips, but still slightly out of reach. Cyberspace is nothing compared with wandering between rows of real live plants, which, admittedly, at the tail end of winter might look like mere twigs full of promise. Promises, like last year’s leftover plants, are cheap. That spells Bargain in my book, and on this particular day, that meant 75% OFF.

Whoaa. “Let me save you,” my heart trembled with joy.

These poor plants looked quite forlorn; they had been frozen and were most likely root-bound. Standing bravely together on the Sale table, they were the survivors of the survivors. Already, the flashy primroses and sweet violets were stealing the show as this year’s pretty new arrivals. This was their one last chance before they hit the big black “C”-pile (whisper it, please: “compost”). They were the big-eyed sad shelter puppies of the plant world, and I wanted them all. There is something uncanny about plants, though, because even though they can’t wiggle, wag, and look cute, certain ones just seem to speak. If you feel that connection, you need to act on it. I do believe this.

So – connect, I did. I came home with a crabapple tree, nearly two dozen assorted groundcovers, 3 periwinkles that would cascade over a large planter, an azalea, 2 rhododendrons (mmmm – in tangelo orange!), a giant Solomon’s seal, a scrubby, but beautifully shaped cotoneaster, and a few other plants for birds, butterflies, and bees, among them a Clethra alnifolia, aka Summersweet, a Rock Daphne that I can almost smell already, a St. John’s Wort (Ignite Red!), 2 gorgeous clematis vines (for only $6 each! I went back for a 3rd!), and a Leycestria formosa, aka Himalayan honeysuckle, which just sounds divine.

One would think that would do it for the year, but then I was at a real weak point the other day and, indeed, it is hard to resist new arrivals. I do believe in supporting our local nurseries, after all. So I vowed to keep it practical while still maintaining my Zen attitude toward staying open to possibilities (just not infinite possibilities – this is also about balance, right?).

For starters, I figured we could really use a good 10 asparagus crowns (very high on the practical scale). Then, since I have been planting a lot of edible fruits over the past year, I figured a gooseberry bush, a Goji berry (Lycium barbarum) to replace one that didn’t make it, and a Korean cherry bush all fit that category and are good permaculture plants in that they serve multiple purposes in the garden ecosystem.  I allowed myself one pièce de resistance: a Japanese Yam (Dr. Yao), aka “Cinnamon Vine” (kind of like that piece of chocolate cake). I congratulated myself for holding back on the two varieties of Akebia that would make an incredible garden statement (read that, potentially take over) and also provide delectable, if a bit unusual, fruits. Maybe next year. Or later. But not now.

Ok, maybe that was a little over the top, but still within reason. But true confession, here. Ahm. I “forgot” to mention that a few weeks earlier (long enough ago to almost forget), I had taken advantage of the County Extension Service native plant sale (there’s that key word again – it starts with an “S,” in case you missed it) and purchased Oregon grapes, red flowering currants, serviceberries, and mock orange plants, all in bundles of 10 (yes, TEN of each – that is 40 [forty!] plants!) I just picked them up this last Saturday, and what can I say – bareroot plants don’t look like much – mere twigs, in fact – but they hold the power to transform the back part of our property into a wildlife corridor.  Now THAT I can envision. The birds and the bees are going to love me.

Um…and as long as I’m confessing…speaking of bees… I was inspired by a friend who raises these complex, interesting creatures – and I’ve wanted to raise bees for a very long time, am sympathetic to their plight with colony collapse disorder and the very real threat that means to agriculture, and consequently, to the economy, to our ability to feed ourselves, and even to survive, when it comes down to it – and besides, I have so very many plants that they would love – it seems like the logical next step in my quest to save (or take over) the world. So I attended a meeting of bee enthusiasts, who were full of information and inspiration. Amidst all the buzz, I signed up. I ordered a “package” of bees, which amounts to somewhere around 15,000 bees – and by some counts, 30,000 (how many bees in a pound – and how can one possibly count them? Good questions to know – and answer – before you buy 4 pounds!).  They arrive in about a month. I am trying to wrap my mind around this. Let’s just split the difference and say a conservative (?) twenty THOUSAND BEES.

A small caveat here – I am very much afraid of bees. My mother was severely allergic to them, and I swell up a lot, too, when I get bit, as does my daughter. But I believe in meeting my fears head-on. To be on the safe side, though, I purchased a protective hat and veil (I like the idea of us all living together in harmony; I don’t like the idea of my eyes swollen shut), and a good book to give me guidance.

I think I really * need * guidance at this point. And maybe even a little therapy (not of the retail kind).

So – for those of you out there with a little buyer’s remorse after a serious case of spring fever and suffering through a cold, not-close-enough-to-the-end-of-winter day when you are FORCED to stay inside in an easy chair and read colorful garden catalogues … take heart. Purchasing a few packets of seeds you don’t really need is nothing to worry about. In fact, it is a *good* thing. Trust me.

Course, come the end of this summer, things around here could be quite spectacular if all goes according to my vision. I am fond of quoting Mark Twain, “You can’t see clearly if your imagination is out of focus.”

What was I thinking?

I think I’ve been a victim of March Madness.

2 thoughts on “A Case of March Madness”