Ok, I know, it’s officially spring and that means the beginning of Panic Season. There is so much to DO, I haven’t even taken time to write on this blog for over a month. As every plant awakes, every weed seed jumps out of its pod, every blade of grass begins it’s spring flush, and as our neighbors are frantically revving up their lawnmowers and weed trimmers twice a week if not more often, how can we NOT feel the intensity of this “now or never” insanity? New seeds and primroses, pansies, and daffodils have arrived earlier than ever, and the stores have metamorphosed into a riot of color (and can someone tell me why lots of bright colors are described as a “riot?” Surely they didn’t live through the 60s!). But seriously, as a plant addict, this seems to be unreasonable temptation. I am salivating over seed racks and strawberry plants I don’t need, and I often arrive home wondering, “Where am I going to put this?”

Spring. We are breathing a sigh of relief – “Ahhh – Spring has arrived!” – while gasping in overwhelmed apprehension – agghh! Spring has Arrived! – seemingly overnight.  Just as we’ve finished up with pruning chores (we hope!), we are already behind in starting starts, planting plants, prepping pots, building beds, digging up grass before it can’t be dug, pruning out the dead stuff, and trying to instill some sense of order before we can’t – recognizing that we never could anyway, which is, indeed, the definition of insanity.

I am going to add one more desperate need to your to-do list, which should be *starred* in order of necessity, since in reality, we are taking care of desperate needs first. And since we are in triage mode (not my normal ADHD/easily-sidetracked mode), this is a 5-star order: WEED YOUR GARLIC.

Now. Not tomorrow. Not – “Oh, it looks like it’s doing fine – it’s a strong plant & can hang in there while I plant more sweet peas…” 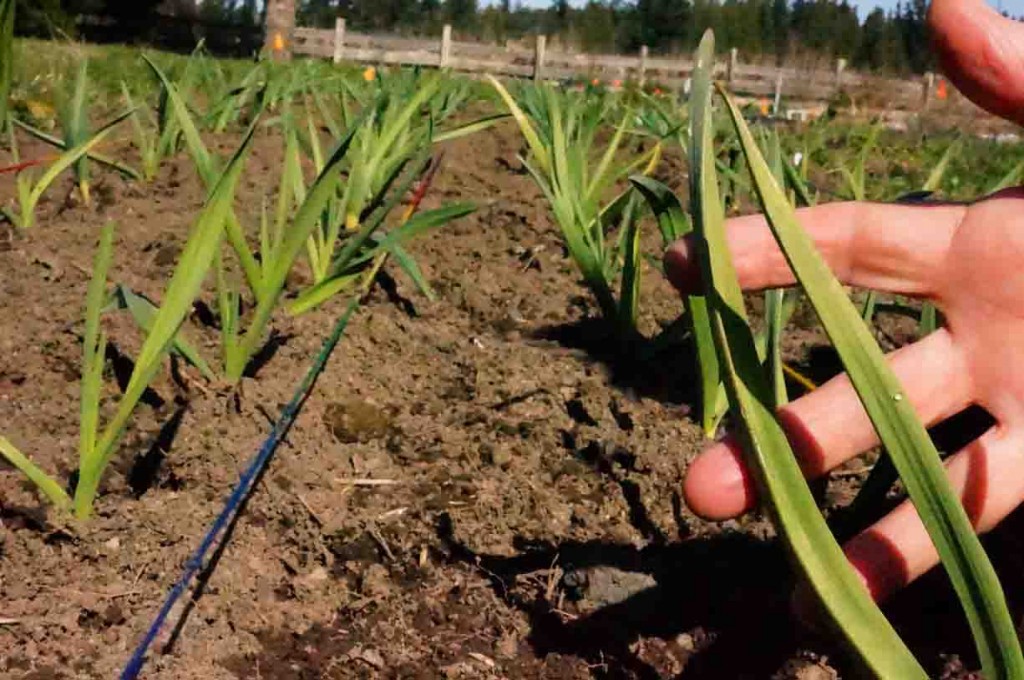 In early March, Garlic shoots stood just a few fingers high, but were starting out strong. This is when I did my first major weeding.

It should have been done before the equinox – so if you were on top of things, Bravo! Yes! Plant more sweet peas, spinach, salad greens, kale, chard, beets, broccoli, berries, shrubs, trees, and the many of their kind who love to get a good start before the heat arrives….

But – if you didn’t get the Round To-it, here is the deal:

Early Spring is the most important weeding you will EVER DO in your garlic bed.

So – Go for it. Pull back the mulch if it’s there. Weed that garlic. Give them some food. Tell them how proud of them you are for getting through the winter. It doesn’t mean that easier days are ahead, though. There are more weeds out there that want to steal their food and water and strangle them out of existence. There are incessant natural forces of wind, rain, and blistering heat. After they survive the elements, they are lifted out of the comfort of the soil and are left to desiccate in dry air. Lastly, they are chopped into tiny pieces and outright eaten with great relish by ravishing beasts. Such is life.

While you are lovingly nurturing these tender (yet sturdy!) sprouts, don’t tell them that last part, mmm-kay?

2 thoughts on “Urgent: Weed Your Garlic!”