Serious gardeners in the Pacific Northwest who are on top of things are already harvesting early-season veggies. In fact, I got an email today from Nash’s Organic Produce saying their first spinach is ready.

I can’t say that I fall into this camp, although by default, I did manage to get a good start with those things that overwintered or that self-sowed on their own. We still have chard, kale, spinach, and onions going strong; a lot of things have bolted into flower and are so covered with bees, I haven’t had the heart to cut them down.

Overall, though, my garden will be radically different this year. I have decided to forego the usual spring frenzy and give more support to our local growers and less to staking up falling tomatoes.  I mean, so much of what I do is just so fruitless!

However, it is hard not to question that decision after our recent visit to Paul Gautschi’s farm, followed by a few days of good weather.

Ha! What an understatement THAT is! Seriously, we are still reeling from the heat wave that blasted through here last week, propelling us into thinking, OMG, if I don’t get those tomatoes, cukes, & squashes in the ground immediately, it’ll be too late!

Personally, though, I did not think that. We paddled our kayaks across calm waters to the Dungeness Lighthouse and back. It felt like a late summer day with nary a cloud in the sky. Perfect.

But now I am having Slacker’s Remorse. I mean, how could I NOT grow our own food after all these years? It’s not a bad thing to re-think our decisions, after all. There is something indescribably special about picking and munching something on the spot…. Certainly, a compromise is certainly in order here.

Sure, it’s a trick question on when to plant and when to wait. One of my favorite seed companies, Renee’s Garden, from whom I purchased last year an assortment of salad greens, cukes, sweet peas, sunflowers, morning glories and other flowers, all of which did really well, advises waiting until nighttime temps are above 50 degrees to plant tender veggies.

Good luck with that, I say! If you wait that long here, there won’t be enough time to ripen before the degrees dip back down along with the daylight hours.

The spring window for planting is when we all get a little nervous. Get it wrong, you might not get a second chance. We get creative with cold frames, cloches, raised beds, and pre-starting things like corn crowded in pots on windowsills all over the house (what are windowsills for, anyway? Isn’t that why they call it the spring window?)

Besides, let me remind us that it’s only mid-May, and even though Seattle topped 80 this last weekend, we were thinking we were suffering at approaching 75. It’s all relative. Normally, we’d be dancing if we topped 60. The onshore flows will ensure we get back to normal in no time, which means the wind that topped 40 knots yesterday is just a breath of fresh air compared with what’s to come. And I don’t know about you, but I usually count our average last frost date at April 15 – which always seems so late to me – seems like we wait forever for that magic number. Well, those recent sunny days brought some very cool nights, and I couldn’t help but notice that some of my plants got nipped – get this – on MAY 11!!! So it can – and does – happen!

Cliff Mass, my favorite weather guy, recently wrote about measuring the temperature of the soil and using that info in gardening. This makes a lot of sense to me.  The air temp, after all, is quite different from that at the top of the soil, which is quite different from what you find a few inches down, which is why I think my peas rotted. Or maybe the birds got them. Either way, if you wonder why something isn’t germinating, the soil temp could give the answer. Cliff provides a link to the Washington State University AgWeatherNet, which gives a daily reading of the soil temperature taken 8” down at numerous stations across the state. At that depth, the temps are undoubtedly more stable, but my first reaction was, “How useful is that? We plant maybe an inch down, not 8!” Still, it is a value that reflects trends, and you can adjust to your upper-level circumstances, accordingly. Which may vary widely, I might add, through the aforementioned creative use of plastic, rocks and concrete, old tires, & lots of etc. that wouldn’t normally be in a garden other than to create individual microclimates to your advantage.

Here is a chart that shows the required soil temperature for germination of various vegetables, which, in full disclosure, I stole from Cliff Mass. Note how the “practical” differs from the “optimal” by sometimes 40 degrees! I would suspect these are temperatures of the soil where the seed is, not 8” down under. 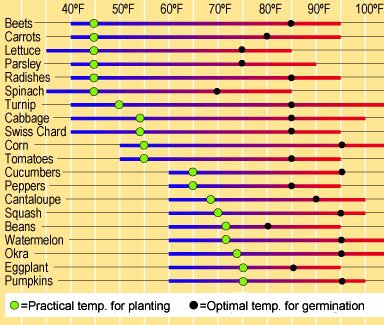 So no – it’s not too late to plant things like peas and spinach (optimum at 70), and yes, I’ll have to try again with the pod peas (not listed on the chart, but place it in line with spinach and parsley), and I will pass on the okra, thank you very much. What – 95 for pumpkins? It’ll never happen – but we DID get pumpkins last year – so take this info however you want.

The point being, don’t let admonitions make you think you can’t. Throw caution to the wind! (I do it so much, I should install a wind tower!)

Whether to plant or not to plant: Maybe it’s also about weighing what is worth the effort for the return. Pod peas, for example, are just SO GOOD fresh and too expensive in the stores! Herbs? Who can’t have a little pot of thyme and oregano on their porch?  Basil takes a little more effort, but it’s a spendy gourmet item in the markets if you like fresh pesto, which I do, I do. If you get ripe tomatoes, you grow justified bragging rights, and more power to ya.

For those of us with time and room, we can continue planting stuff all the way up until fall – garlic being a prime example of something to stick in the ground in October. I usually wait until later this month or even early June for potatoes so they are ready just in time for a fall harvest and storage, but I see some volunteers are already up, which will give me an early crop (and yes, those were the ones that got hit hardest by the frost, but they are making a comeback). Potatoes might be cheap, but if you consider commercial growers kill the tops with weed killers to facilitate harvesting, I think they’re worth either buying organic or growing your own if you have space.

So do not be dismayed by the calendar and whatever you haven’t been able to accomplish! All it takes is a few days of sunshine and the soothsayers are out there predicting drought and pestilence. But hey, we only get an average of 17” of rain here anyway – and the pests, well, they, too, are part of the world we live in. Some are like weeds, underappreciated for the role they play.

I just remember how last year never seemed to warm up until mid-July – and yet, when I look back at the pictures from last year’s garden, I am blown away by the sheer amount of biomass! Despite day after day of cold temperatures, heavy rains, unrelenting wind, and outright neglect by yours truly when I disappeared for a full month about this time – my garden hung in there. I came back in late May to a garden full of weeds and started planting anyway – and all this stuff still managed to grow. Most striking, the pod peas, sweet peas, beans, squashes, and nasturtiums, which just seemed to clamber over everything, and the spectacular sunflowers towering overhead. Check out this photostream:

So Plant ON, Plant People!