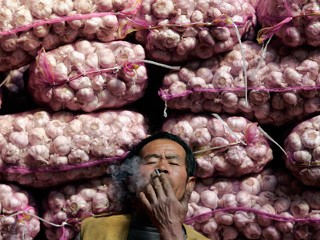 Chinese Garlic Lord relaxes, thinking of all the money he is making with his stash of garlic. If you ask me, this picture illustrates another good reason to BUY LOCAL. (Reuters photo)

Ok Folks – this is just in from the news, so you know it must be true.

GARLIC – yes, our humble little bulb of the Allium family – is outperforming gold, silver, oil, real estate, and stocks in China. In fact – and I am not making this up – people are INVESTING in garlic – trading it on the black market – HOARDING garlic (yes, I have been known to do this, too) – and quadrupling their money (umm – it’s just a pleasant gastronomic memory of very high proportions for me).

There is a story of a young jobless guy with basically nothing going for him who bought 100 tons of garlic and turned around and more than doubled his money a couple months later and bought a new Toyota pickup (I would have suggested he get an education, but he was one happy guy, regardless). Had he held out a little longer, he could have doubled that once again. In fact (loosely defined), in some provinces, the price skyrocketed 15 to 50 times that of normal, depending on the source you read – and I know that’s a pretty big spread – but the concept is still there:  Garlic – yes, GARLIC – has been named the Best Performing Asset in China this year. People are living high on the stuff – buying homes with swimming pools, movie stars, and the whole works with their profits. We’re talking about people becoming overnight millionaires trading – yep – garlic!

Gee – and all this time, I’ve been trading garlic for good cheer.

Seriously, folks – this is Wall Street madness taking place in the trenches. According to the Financial Times out of London, “In Shandong province, China’s garlic-growing heartland … cash dispensing machines have run out of money amid frenzied trading.”

And get this quote from ABC News that according to the China Business News, “coal mine bosses — who are often depicted as being both extremely rich and nefarious speculators – [have] been playing the garlic market, hoarding bulbs and hauling them between storehouses.”

I admit, I have never been to China, but it sounds like there is mafia opportunity here, and I think we have the makings of a movie with lots of high-powered kung-fu moves fighting over who gets the last clove of garlic – at least, that’s how it works in my family, and I tell you what – nobody messes with me. But then, my family is Sicilian.

But hey – we all understand that for the price to go up, there has to be a demand – and those of us who know garlic also know the fresh stuff only lasts so long. Why the demand? Apparently, because of last year’s low prices, farmers planted half of their normal crop (and there were those who were tuned into this fact), so now there are fewer bulbs to go around. In a country like China, which produces about 75% of the world’s garlic (followed by Argentina and Spain – a fact that may be news to Gilroy, the self-proclaimed garlic capital of the world, but lest I digress…), reducing the crop by 50% amounts to a lot. That’s still a lot of garlic. Try to picture 1 million acres of just garlic. I just can’t.

Enter the H1N1 panic. I am not one to argue with traditional Chinese medicine, which goes back thousands of years and is respected the world over; however, there is no scientific basis to the idea that garlic can ward off the swine flu (according to my #1 source: the Internet), although garlic has long been associated with neutralizing viruses, killing bacteria, disinfecting closets, and repelling vampires and other undesirable suitors.

Imagine this scenario: people in schools are stashing supplies of garlic to ration out to students. I am picturing small children in uniforms, stoically standing in straight rows, obediently chewing raw cloves, eyes watering. Garlic will make you strong, alright.

I admit, this was the best garlic year ever for me, too, but not because garlic is a scarce commodity or because I was capitalizing on fear.

No, as boring as it sounds, I attribute my success to the basic business principles of consistent marketing, building a reputation, nurturing relationships, and a lot of hard work growing, weeding, harvesting, curing, cleaning, and packaging the bulbs, which I get to know on an individual basis. Come to think of it, if you look at my hourly wage, I wasn’t all that successful, all facts considered, which is why I decided to cut back my 2010 crop by – guess what – 50%, a decision I am now regretting. Many of my neighbors are jumping on the garlic bandwagon and are upping their plantings. I don’t fear the competition. There is plenty to go around. Garlic is always fun to share and trade. We just trade on a different scale.

See, like most investment opportunities, by the time most of us hear about them, it’s too late. And I am not one to criticize our friends on the west side of the Pacific, because they work very hard to make a few measly dollars (translated from Yuan, Won, Yen, Dong, etc. – depending on where you are).

Is it too late to invest in garlic? If you’re imploring me, I have to say, yes. Sadly, mine is almost all gone. But if you’re begging me for my last few bulbs, I will probably give them to you – gratis. I am a sucker for desperados.

It does seem rather ironic, though, that for many years I have been trying to educate people (a term I have always found rather patronizing, but here I am using it) on the difference between the superior quality and taste of my gourmet varieties of garlic – some of which are relatively rare in this country – bulbs that have been individually nurtured with my own two hands and that cannot be grown by commercial mechanized methods – and those relatively tasteless 2-for-a-buck Chinese bulbs you still find piled high in the grocery stores. And although I am finding more fans in recent seasons, thanks in part to foodie and locavore trends (I admit, I am a member of both of these groups) – it is the crisis in China – of all places – and the subsequent skyrocketing price of cheap garlic – that is making people sit down at the table and take notice of the value of this little bulb.

Jeesh – more valuable than gold! I always thought so. You can’t eat gold.

As I always say, Eat Garlic. Eat LOTS of it! And, of course, for the very best, BUY LOCAL.

4 thoughts on “Buy Garlic, Not Gold!”

First passionflowers in the greenhouse! The vines

Honey bees EVERYWHERE!!! Zillions of them!!! THIS

Some people see fairies in the garden. We see dino