A Gentle Way to Install a Swarm

It was Mother’s Day. We were headed to our son’s house for a celebratory feast for a room full of mothers. As the matriarch of the group, or at least, the oldest, I had made a kick-A potato salad of grand proportions. I was considering a rhubarb-cooler-sort-of-drink and headed out to the garden to pick some stalks, when I couldn’t help but notice a LOUD buzzing. The air sure was full of a lot of bees! They were flying every which way. And I thought, Oh. My. Gosh. They are swarming AGAIN! Who is it this time? And why is it that this happens every time we are on our way out of here? 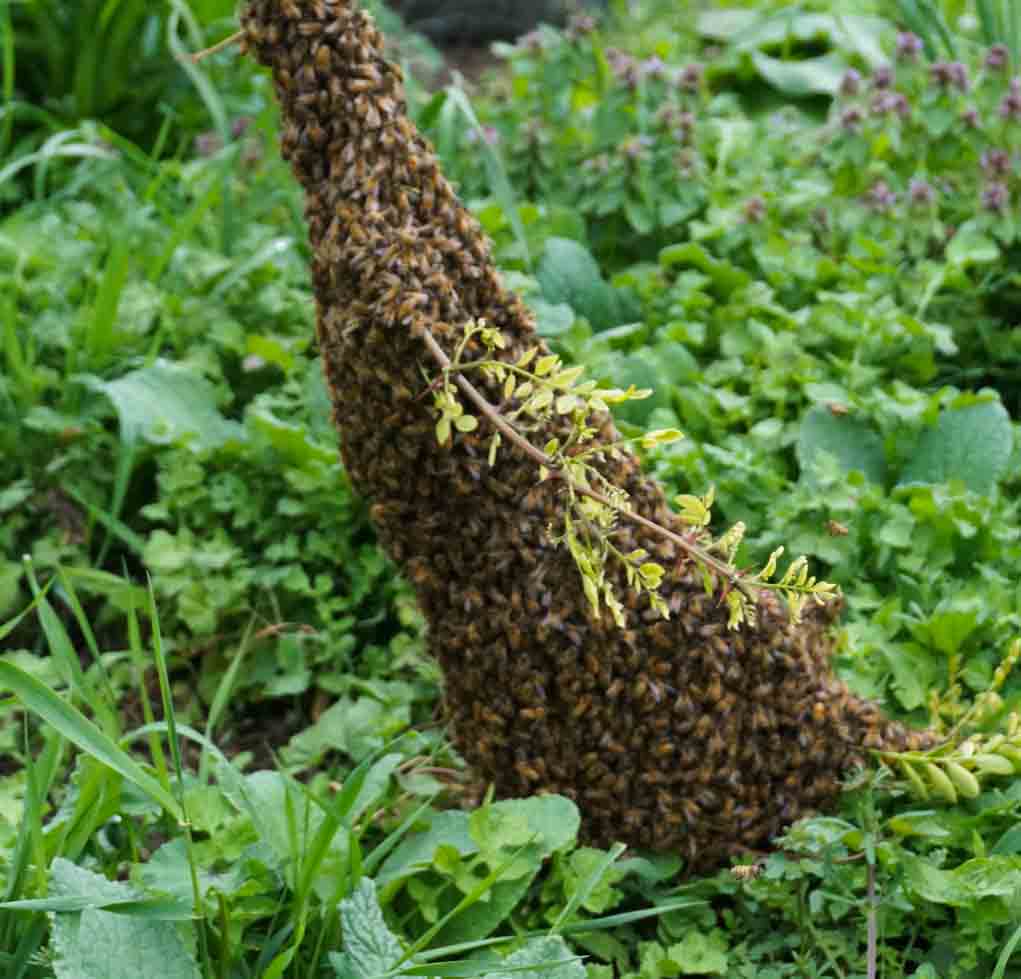 Up close and personal with yet ANOTHER bee swarm. Wow!

Sure enough, a large cluster started gathering on a branch of a young black locust tree located close to the hives, and once again, not high in the air, but near the ground.

This swarm appeared to be coming from Hive 1, the little swarm I picked up last summer that I thought would never make it, but that managed to pull through the winter stronger than ever. We added a box to it this spring (3 boxes – apparently not enough? I don’t get it.)

I had been noticing quite a few bees gathering at the entrance over the past few days, even when it wasn’t that warm, and I wondered whether something was up. 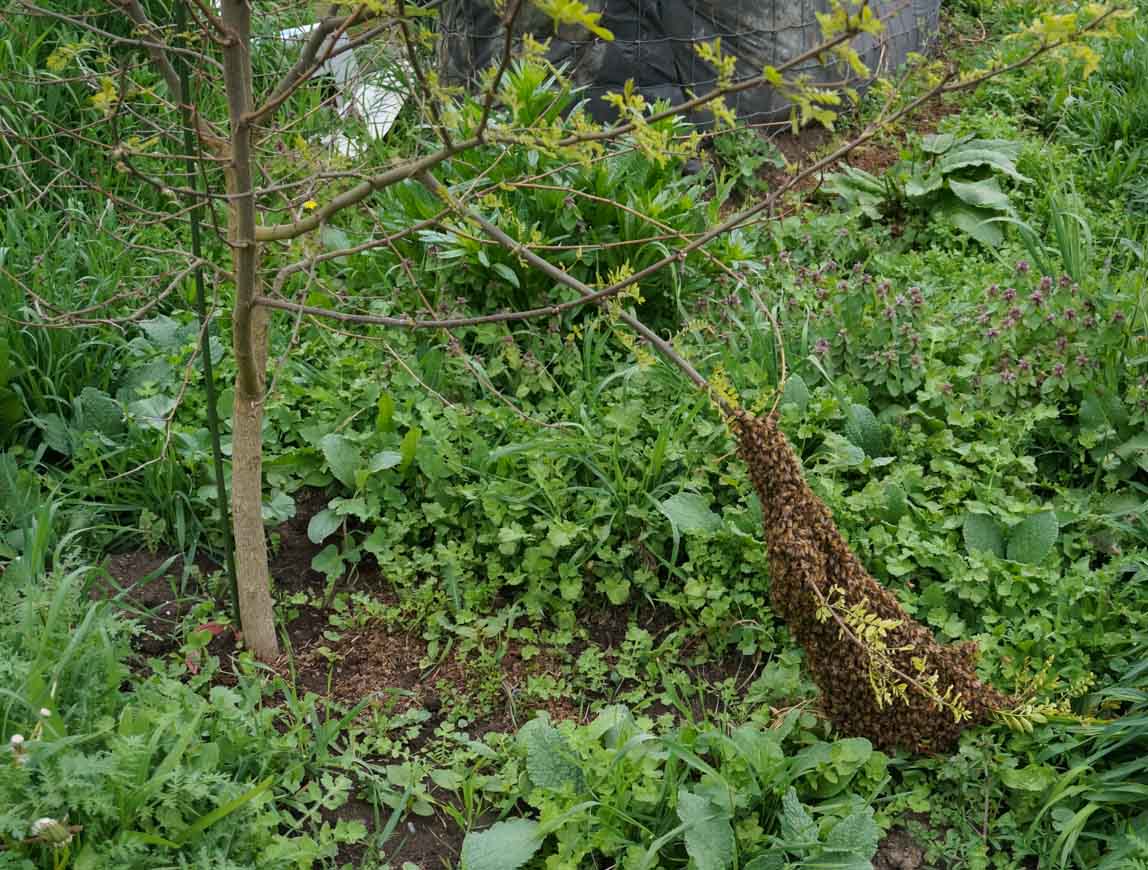 The weight of the swarm is heavy enough to pull the branch to the ground.

“Well,” I thought, “there’s not a whole lot I can do at this point other than to put out another swarm trap box,” so I positioned it close to where they were gathering, sprinkled on a little lemongrass oil, and we left.

We returned not long thereafter with our grandchildren, because truly, a swarm of bees is a sight to behold, and one I didn’t see until over 60 years had passed in my lifetime. Yes, they were still there, and now the cluster was so heavy, it pulled the branch all the way to the ground. The kids’ eyes were wide with amazement. The older grandson (age 9) loves science and facts and had learned a thing or two about bees in his 3rd grade research. He kept a safe distance in observing their behavior. The younger granddaughter (almost 7) fearlessly walked right up to the swarm to get a look up close and personal. She knew instinctively that they would not sting her, but that they wanted to cluster tightly together to protect one another.

We went back to have dinner and continue festivities and when we returned later in the evening about dusk, they were still there. I felt both relief and apprehension. With a small-craft-warning weather advisory, the wind was already starting to pick up, and we could feel the first of a few cold sprinkles. Bad day to pick to swarm (what were they thinking?) They were going to get very cold and wet if I didn’t do something and do something quickly. Now or never.

So here’s what we did:

We opened the swarm box (no one inside; everyone on the cluster) and removed the top bars. We taped the front entrance shut. I held the branch while my husband clipped it, and then I just slowly, calmly, gently placed it in the box. The cluster of bees swayed slightly as I did so; a small bunch dropped to the ground; the majority, though, were in the box. No fuss, no muss, no panic by man nor bees. We quietly closed the lid, as simple as that. (AND, I can proudly say, I did this without a veil, gloves, or bee suit! My friend, Walt, would be so proud of me!) 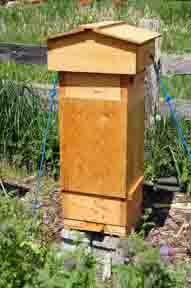 Note how swarm box fits right on the hive between 2 boxes. 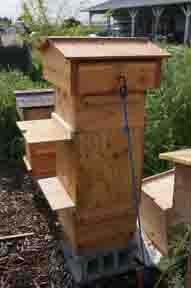 Note how ceiling and floor panels pull out, giving you more control of how the bees can move into their new home. Bees will naturally move up, a real advantage. (2nd swarm box on ground to right)

Ok – now for the ingenious part. We took the box to Hive 3, which was now (conveniently) empty and ready to go. We placed the swarm box BETWEEN two boxes with top bars and opened the roof panel so they could move UP, as is their natural tendency, into the box above. We left the bottom panel closed for the time being. The swarm was now more-or-less installed.

But there was still a cluster of confused bees on the ground. We took a second swarm box, opened the floor panel, and quietly placed it on top of the majority of them. We left one corner slightly elevated to provide an opening, and other bees went right inside. It was getting dark and there was nothing more we could do, so we walked away.

It rained very hard that night and I was thankful everyone was sheltered.

The next day, we went out, and all was quiet. We opened the floor panel on the swarm box installed on the hive tower, which allowed full access to the hive from the normal entrance at the base of the hive all the way up to the top box, where many of the bees were (we hoped) getting situated.

Then we went to the swarm box on the ground, closed the floor panel (the bees inside were clustered in an upper corner) and set the box in front of the main hive. We removed the tape covering the entrance. A few started to peek into the light.

We left them to explore, and sure enough, a great many did.

It seemed some of the bees in the swarm box on the ground, however, were reluctant to leave, so we opened the roof a bit to encourage them to venture out. I could hear a few fall to the ground when I pulled open the panel – there were more in there than I realized! So we placed a pillowcase from the swarm box to the hive to encourage them to follow it. And they did that, too.

The next thing to do was to walk away and do nothing and let them get situated. This was all going so well, I couldn’t believe it.

The next day, another storm was forecast to be blowing through, and I figured before it arrived, it would be best to remove the swarm box from the main hive and close things up snug and tight. When we started to close the roof panel, we could hear bees drop to the box below along with an odd plop. The lesson here was that they all did not immediately move out of the swarm box, but many continued to cluster in a top corner where they had started building comb! It was pure white, delicate but strong, and oh so symmetrical. Of course, the critical question was, where was the Queen? And I honestly don’t know for sure.

So – while Jeff lifted up the top box, I gently tapped the swarm box to encourage the remaining bees to move down, using a feather when necessary, and then pulled out the box and set it aside. We brushed the bees with a feather to get them to move down between the bars, replaced the top box, the quilt, roof, and done. Simple. The bees were amazingly calm.

This has been such a GENTLE way to capture the swarm! No brushing or dumping! No chaotic frenzy. I hope they want to stay!!! 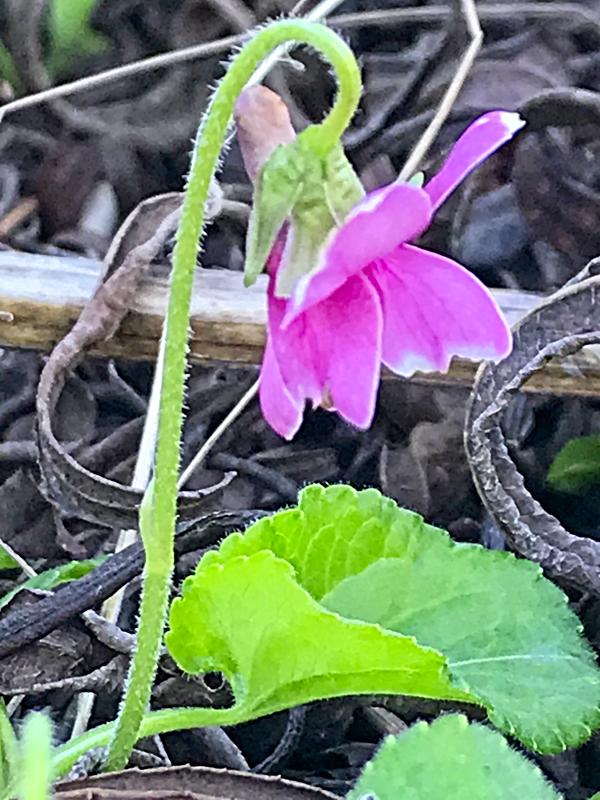