This was my most successful year ever for tomatoes, and before I get into another long story, I have to take a moment to give credit to Lisa Boulware and Mark Ozias at A New Leaf, from whom I purchased 5 indeterminate but very determined varieties of exceptionally strong starter plants: Juliet Grape, Pruden’s Purple Heirloom, Peacevine Cherry, Mark Twain Heirloom Beefsteak, and Cosmonaut Volkov. Seriously, with names like that, how can you not plant tomatoes?

I confess – I’m not an expert when it comes to tomatoes. They get funguses and blights and seem to need a lot of maintenance. Kind of like kids, only seasonal. 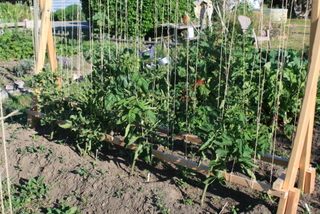 But this year, we knew it would be different. We were excited about tomatoes. We built the ultimate tomato trellis and laced it with twine. I carefully trained my young plants into position. Everyone looked full of promise. I reviewed several online videos about pruning, staking, and growing the perfectly mannered vine. Those pleasant people make it look so easy.

And then about the time of puberty, everything kind of got out of control. One day, everyone was orderly and in their proper places. Next thing you know, they turned into a bunch of unstoppable rebels. They were climbing up and over one another like savages. I gazed in amazement. What’s with that?

Then one morning, devastation. I went out to the garden and was greeted with the horrific site of everything on the ground. The trellis twine proved weaker than the plants. It was impossible to pick them up without breaking them. It was one of those parenting moments when you think, “I’ve really screwed this up.”

But the plants? Liberated! They continued to sprawl up and over everything within reach. Unbridled.

And what about Discipline? Let’s just say it wasn’t worth the battle. To my chagrin, I let them have their own way.  My children are all free spirits, I reasoned.

Free indeed. Borderline insane. I stood in the middle of this scrambled mess and thought, “What have I unleashed here?”

The wind picked up and thrashed the plants with violence. They were shaken, but unmoved. The sun beat down on us with a density that sapped the energy of all my human and animal friends. The tomatoes only intensified. Even the ones on the bottom of the heap were turning a bright red.

Wait now … Red tomatoes? I had rarely seen such a thing in my garden.

I tentatively tried one. Whoaaa. These weren’t just any sort of red tomato. These were explode-in-your-mouth sweet juicy tomatoes that get all over your clothes. These were tomatoes that make you realize why you grow your own and why you must every year until you die.

I was so proud. Kind of like one of those parenting moments when you get personal satisfaction from your progeny’s accomplishments, when deep-down you know all you did was provide a little food and water now and then and maybe root from the sidelines occasionally.

They were unstoppable. I had never seen such tomatoes. I picked them right and left and down the center and the more I picked, the more determined they were to keep on producing. Or at least trying. Kind of like my teenagers, but we won’t go there.

And when the early frosts of October hit us sharp and sudden, it was not, after all, totally unexpected. I tried desperately to protect them with plastic, draping it over the trellis framework and weighing it down with bricks. The wind ignored my efforts, picking up that tarp and flapping it wildly, laughing at me – hysterically laughing at me, I might add. I bravely grabbed that tarp and tried to anchor it down. It was like an incredibly large and powerful kite. It threatened to pick me up and toss me to the clouds, and I seriously thought I might become a Darwin Award statistic.

There finally came that moment when I knew it was of no further use. It was time to lay my plants to rest. I waited for a calm and thoughtful morning and gratefully picked large bowls of the remaining red fruits, enough to can a couple batches with which to remember the summer in the darkest of winter.

Then came the reality check: what to do with all the green ones? There were a lot. I do mean a LOT. I couldn’t just let them wither. I couldn’t just toss them on the compost heap like a discarded relationship (not that I have those).

You can only eat so many fried green tomatoes.

I made some Piccalilli-type relish, but we aren’t big pickle fans.

Then there’s Green Tomato Mincemeat, which brings visions of the Crusaders returning from the Holy Land, and the 3 spices (cinnamon, nutmeg, and cloves), representing gifts to the Christ child from wise kings. Ok – maybe that’s not your vision. Maybe it’s more like jolly old Englishmen eating shredded meat and lard and dying early of cardiac arrest. I looked at a lot of recipes – some that used suet (no thank you); some that required a kettle that could hold nearly 20 quarts of ingredients (yikes!); some that required a certain number of fruits (25 small, medium, or large – how big is a large?).

And then I came across the following recipe, featured in Renee Shepherd’s book, “More Recipes from a Kitchen Garden.” (Also see her earlier book, “Recipes from a Kitchen Garden.”) It has a balance of green tomatoes and apples (which we also have in abundance right now), has just the right amount of spice, and is cooked in batches that are easy to manage. This recipe has worked particularly well for me. In fact, I like it so much, I’ve canned 14 quarts of this stuff so far. Seriously. The stuff is that addictive. 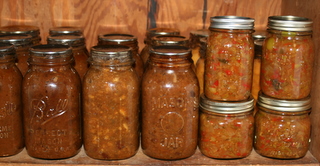 The main thing I changed was that I threw in a blended-up orange (along with the lemon) instead of the brandy (Ahm. I drank the brandy. I know the brandy is traditional, but I needed it for medicinal purposes. With the H1N1 around, one can never be too careful). Oh, and on one batch, I forgot to add the butter (probably after I drank the brandy) – but it still turned out just fine. You simply toss everything into a pot and cook it down – but watch it carefully when it gets thick so it doesn’t burn. Actually, you have to do more than watch it – you have to stir it. You also have to taste it repeatedly to make sure it’s right, which you know it is, but then you taste it again anyway. And again. Be sure to leave some to put in the jars.

I asked Renee Shepherd permission to print her recipe, and I just received a personal response saying this recipe originally comes from Beth Benjamin, the Horticultural Advisor at Renee’s Garden, for whom this recipe is a family holiday tradition.

Be sure to check out Renee’s Garden website. She collects seeds from all over the world, has a keen appreciation for the link between culture and food, is dedicated toward sustainable practices, and shares her bounty of garden tips, recipes, and lore with everyone who stops in. She is who I want to be when I grow up. At the very least, her site is definitely a place to spend some time in those January months when you are dreaming about spring.  Be sure to refer to her tips on garden planning. And you might want to bookmark it so you can go back and read her growing tips and especially to participate in the “Garden Community” section. Oh – and if you’re looking for recipes for things like arugula or zucchini (I so needed you a couple of months ago!), her site is the place to go. Although I might get a kickback if you buy her books from Amazon, I just checked the Amazon site and it looks like all they have are used ones. You can buy her books directly from the Renee’s Garden website right here.

And now for the recipe, which is sure to become one of our family holiday traditions as well:

Mix together all ingredients except butter in a deep, heavy-bottomed kettle. Bring to a boil and immediately turn down heat so mixture will bubble gently. Cook uncovered over medium to low heat, stirring regularly to prevent sticking, for 3 hours or until mixture is thick and liquid is absorbed. (Watch and lower heat if mixture is spattering.) After about an hour and a half, begin to taste often (SEE – the recipe says so!). If liquid seems to be evaporating too quickly, add additional vinegar or brandy, depending on taste (This is a direct quote. Personally, I would taste that brandy before adding, for sure). If mixture seems too tart, add more sugar. Once mincemeat is cooked down to desired thickness, mix in butter a little bit at a time until well combined. Can or freeze, or store in the refrigerator for up to a month. Makes 3 quarts of rich aromatic spicy-brown mincemeat, enough for 5 small pies.

So – Don’t let those green tomatoes go to waste! Mincemeat pies are so easy when you make your own mock mincemeat! Share with family and friends for a happy holiday or for no particular reason!

First passionflowers in the greenhouse! The vines

Honey bees EVERYWHERE!!! Zillions of them!!! THIS

Some people see fairies in the garden. We see dino