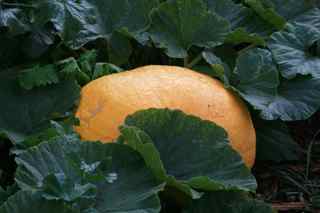 My daughter took one look at the Phat Jack and said, “They’re kind of like husbands. Nice to have around, but then what do you do with them?”

I’ll have to think about that one. Seriously, though, what do you do with the Great Pumpkin after Halloween has come and gone?

I purchased this as a little sprout at our local feed store. It kind of called out to me from the rows of greenery begging for a place to sink their roots. Plus I liked the name. Phat Jack. I probably should have done some research, or at least read the label a little more closely, but that’s not the way impulse purchasing works.

We watched it grow over the summer with great anticipation. It was the only one of its kind. It loomed larger and larger in the corner of the field like a rising sun. The vines and leaves twisted and turned and spread out from its center in a kind of plantary invasion (yes, I just made up that word). A lot of resources went into growing this pumpkin. By the size of it, it must have sucked the soil dry of anything resembling water and nutrients. I didn’t pamper it or coddle it or feed it milk or do anything special to get it to this size – except feed it a little worm tea. Basically, though, it did this all on its own. 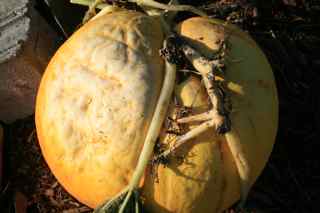 It’s a rather unusual specimen. Just look how it grew over itself and formed creases around its vine – as heavy as this thing was, it did not crush its lifeline. On the contrary. It protected it.

What to do now, though. That was the question.

We didn’t get around to carving it for Halloween – or maybe we just couldn’t bear to stab a knife into it.

Small rodents (also taking over the garden) had set up some kind of commune beneath its jungle canopy – reason enough right there for eviction.

As much as I sing about the cycle of life and compost, I couldn’t just let it sit there and rot.

Sure, it’s almost Thanksgiving, and we all know what to do with pumpkins. Those sweet little baby pie pumpkins make the very best custards and pies – and breads, soups, stews, and goulashes.

But this is a different animal. It might not reach County Fair blue-ribbon status, but it’s still pretty freakin’ huge!

So what did we do? 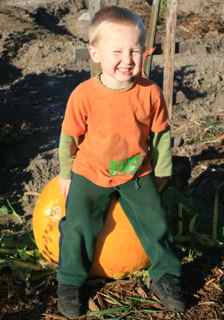 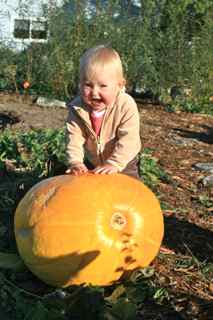 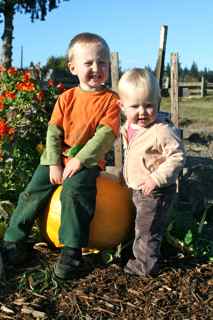 We rolled it around.

We jumped on it.

We drummed on it.

We danced in circles around it.

We stood back and marveled at it.

We took pictures of ourselves beside it, like fans beside a garden star.

And then, after all that fun, quite methodically, I took a pruning saw to it and cut it in half. Simple as that.

And with a great display of strength, I lugged each half across the field and to the house. (A smarter monkey would have used a tool, like a wheelbarrow. Make a note of that for the next time.)

It was a déjà vu pregnant moment when I stood on the scale, holding each half in turn, trying to see beyond the roundness that stood out from my belly. Pumpkin weight: 65 lbs. That’s pretty healthy, alright. But would it be good eating?

The first batch, I cooked bowl-side up, covered lightly with foil. Talk about a lot of water! I scooped out a full 2 ½ quarts of sweet liquid, which I later put in a carrot-squash soup with a little celery, onion, sausage, and leftover rice. Mmmmm. I didn’t cover the next 2 batches. The result was drier and more of that oven-roasted flavor from the caramelized sugars. A little stringy? Sure. But nothing a blender couldn’t fix. Admittedly, the taste is not as “pumpkinny” (I think it might be a real word – I am sure I am not the first to use it) as the little pie varieties, but still excellent eating.

All total, about 15 quarts of pureed pumpkin went into the freezer, plus some left over for throwing in the soup, spaghetti sauces, and – my crowning achievement – dog biscuits. What a simple way to add nutrition to homemade dog food! And SO very economical!

Unfortunately, the biscuits were woofed down before I thought to take a picture. So I will make another batch, tweak the recipe, and share it with you in my next installment. Stay tuned, friends.

And yes, this post is just an excuse to share pictures of our cute grandkids. 🙂 Silly ol’ gramma.