The Good, the Bad, and the Downright Ugly 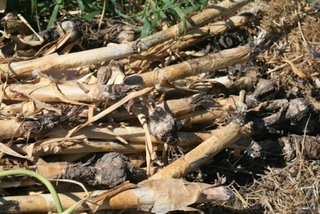 Obvious signs of neck rot and mold on these garlic bulbs. Don't compost them; just burn them.

In times like these, it is good not to panic. Take your bearings. Breathe slowly, deeply, inhale, exhale. That’s right. All those things that are important when it comes to living, keep on doing them while you sort through your options.

As previously noted, when I first harvested the varieties that looked the most mature – well, actually, over-mature – I found that the crackly brown and withered looking appearance was not the sign of maturity, but the sign of an early demise (mental note: stay away from mirrors!).

Subsequent harvests confirmed: rampant neck rot and black mold. This is serious stuff. Some of them just pulled apart from the stems. Some of the bulbs were completely missing. I picked up what I could and put them in the burn pile. It was a sad day.

Occasionally, however, I’d come upon a bulb or group of bulbs that weren’t too bad. Some appeared to have a thick layer of hardened mud around the outside of the bulb. I hadn’t watered them in at least 2 weeks. Some showed signs of mold; others, not so much. Most were average size; some were quite large, even though I had not removed the scapes (more about that later). I set these bulbs aside in a different area. 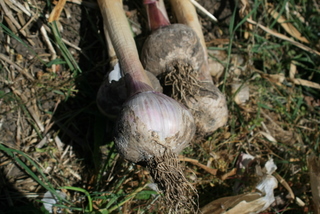 Maybe not the best, but still a decent bulb of garlic.

Then I came across a few bulbs that appeared halfway decent – some were as large as any I had grown. Had conditions been better, I knew this had the potential to be a very good crop. It also occurred to me that although garlic bulbs appear tough and sturdy, they are actually very easily bruised at this point. I treated them with the utmost tenderness and hung them to dry under the eaves of the north side of our barn.

I went back to the imperfect bulbs that I had left on the ground to dry. I found that sometimes I could rub off the dirt and a decent bulb appeared. I hung these in a different area, separated from the good bulbs. On the ones with a darkened (sometimes almost black) outer skin, I found I could peel it back and lo and behold (!), beneath it were clean, white cloves! I bit into one. Flavor burst in my mouth like the fiery flames I used to fan last summer when, after a particularly memorable afternoon of fire breathing, I was told I smelled so strongly of garlic, I had to sleep on the couch!

I put these darkened bulbs in a bucket and brought them in the house under cover. They were like my dirty little secrets. I would keep them away from the other bulbs; after all, molds have a tendency to spread. I certainly wouldn’t sell them, much less plant them, but I tell you what, I will have no problem at all eating them! I do not expect them to stick around long; I will have to do something with them soon. Dehydrating and pickling might be good solutions. 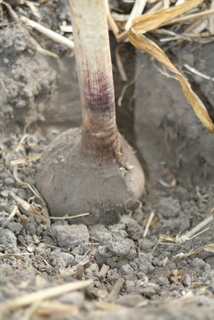 Dig away the dirt and look! This garlic is still growing! And it looks good!

Another surprise for me this year is that I am still harvesting. Normally, bulbs would all be hanging by the 4th of July or the following week. Based on how my remaining bulbs are doing, I’d say I harvested some of the plants a bit prematurely. I dug some of the dirt away to inspect a bulb or two of the Siberian and Russian Giants – and guess what? They look fine! [Interesting how disaster makes you appreciate small successes. Please join me in a little happy dance, and without much provocation, I’ll probably whip out my harps!]  I will probably dig them up in the next day or so.

I will be taking a closer look at the soil, water, weather, growing methods, & whatever etcetera remains, and toss around some more thoughts to think about – but the lesson for now is that even when all seems lost, good things might still be found.

If you are like me and some 19 million other people out there (or more), you might be experiencing Garden Overwhelm. This time of year when night equals day (more or less) is a good time to think about our own equilibrium. This post explores how to get back on track, and when all else fails, your dog just might have the answers. Happy Autumn Equinox! 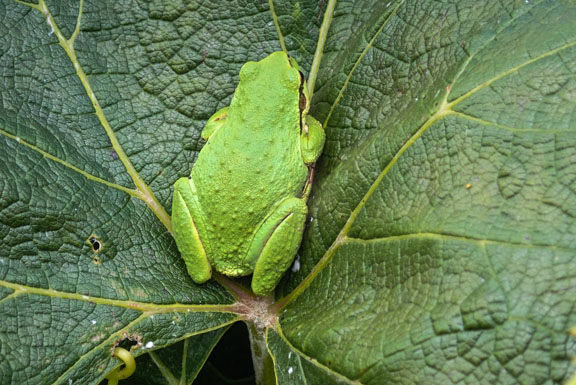 Garden Chaos – The Rest of the Story

The rest of the story... the late summer garden has turned out nothing like what I envisioned in the spring, but in some respects, is so much more. It's hard not to get discouraged when once again, I've truly lost the battle against grass, thistle, and bindweed. Garden chaos rules, but neatness and control are so overrated, are they not? Here were my "Ah ha!" moments.

Are your garlic plants looking a little yellow? Will a cold, damp spring bring molds? What can you do if there are problems? What are the signs to look for? Let's weigh our options and figure out the best ways to prevent diseases.