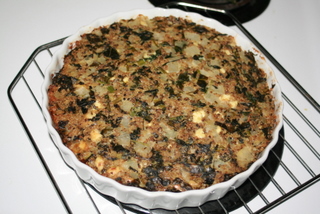 We haven’t done recipes on here in awhile, but truly, I get more hits on my recipe posts than on anything else. Which just goes to show, a lot of us are trying to figure out what’s for dinner (again).

As mentioned in my previous post, NOW is the time to use those spring greens, because later on they get strong and bitter. Personally, I had easy access to lovage, sorrel, parsley, pea shoots, kale, and collards, so those are things I wanted to use. Lovage & sorrel, especially, need to be used in small quantities, but can really add that little “zing” that makes everyone wonder, “Jeez! What IS that!”

I got the idea for this recipe from the latest (March 2010) issue of Vegetarian Times. Although I’m not a strict vegetarian, I’ve been a subscriber for years because they inspire me & help me keep on track. But, of course, I rarely follow recipes. Likewise, if you wanted to add dead animals to your soon-to-be famous Quinoa Composite (or whatever you want to call it), that would be entirely up to you. (BTW – the VT website is a great site, with a searchable recipe database and a lot of resource links, so I highly recommend it.)

My first question, though, is, “Can it be a quiche without a crust?”  Maybe this should be called Grains & Greens in a Pie Dish (note: not in a PIE; in a pie DISH).

Seriously, this is one of those dishes that makes you suspicious because it is just so freakin good for you, it’s easy to fix, and it tastes great, too.

For those not familiar with quinoa (pronounced keen-wa), it was a staple of the early Incas. Anything that has been around for 6000 years has stood the test of time, in my book. It is the mother grain of grains (although some would argue it’s a fruit; others say it’s a seed; maybe it’s all of these), having more protein than any other “grain;” plus, it’s a complete protein, meaning the amino acids are in balance so you can absorb it better. It’s gluten free, easy to digest, and what’s more, cooks up in 15 minutes or less, making it right up there with cous cous for camp food. You can now find it in big warehouse stores; so it has definitely gone mainstream.

I’ve never grown quinoa; here at sea level, I question how well it would do when it is normally grown in more mountainous regions. However, I have grown red amaranth, a dye plant relative to quinoa, so it might be interesting to try. 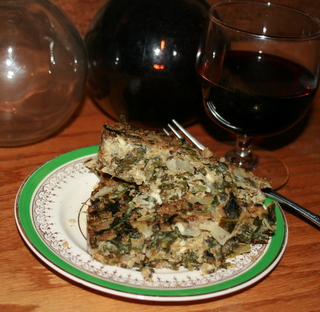 Obviously, this is another one of my freestyle recipes, which is more about attitude than measurement. When you start throwing in wild things and people think you’re getting a little crazy, it can be really liberating, you know? Bring on the wine, toss a little of that in, too! Why not.

Here’s what you do:

Collect your greens. As I mentioned above, I had collards, kale, lovage, sorrel, parsley, and new pea shoots (they re-seeded themselves – looks like I missed a bunch!). Obviously, I could have added dandelion, mustards, chickweeds, & etc., but I had several bunches at this point and it was beginning to look like a lot. Vegetarian Times suggested chicory and romaine lettuce plus extra green onions and dill. It’s too early for dill here and I don’t have easy access to chicory. I imagine my version is stronger flavored in a different way.

Toast your quinoa. Just brown it over medium heat in a dry pan (use a pan with a lid – but leave the lid off for now). It will start popping like popcorn and gets this wonderful nutty aroma. Be careful, because once it gets hot, it browns quickly, and you don’t want to burn it. Take it off the heat, stand back, and add 1 cup of water or stock. Quickly put on the lid to capture the steam, put in back on low heat, and let it cook about 15 minutes.

Now would be a good time to get your oven heating up to 350 degrees.

Cook your veggies. Put a little olive oil in a pan and saute the chopped onion until translucent. Then start adding your collected greens (also chopped), according to how long they need to be cooked. For example, first I added the collards; while that was cooking, I rinsed & chopped kale; while that was cooking, I chopped the lovage (not too much! this stuff is powerful!); then came the sorrel, which needs very little cooking; and lastly I added parsely and pea shoots, which tend to be rather delicate. You don’t really need to cook these latter greens – and there’s no point in cooking collards to death, either. This all goes rather quickly. Take it all off the heat. If there’s some liquid in the pan, that’s ok. If you time this right, your veggies & quinoa will be done at the same time.

Alternatively, you could get the quinoa going while you pick the greens. Whatever works for you. I tend to get sidetracked in the garden, so I don’t start cooking until I’m back inside and on a mission.

Add cooked quinoa and crumbled cheese to veggies and stir it all up. (VT also added goat cheese; I really found the feta to be quite enough, and the stuff is so salty, you don’t need very much or other seasoning).

Prepare baking pan. Melt a tablespoon of butter in your baking dish – just enough to lightly coat the bottom. Just put it in the oven for a minute while you do the next step.

Add beaten eggs. Do this part quickly in case your veggie-quinoa mix is rather hot. You don’t want it to scramble at this point.

Spread veggie-quinoa mix in pan, pack it down a bit, and bake for about 20 minutes – just long enough to solidify everything and maybe slightly brown the top.