During the flurry of October, between hauling in squashes, picking apples, making jam, planting garlic, and dumping wheelbarrows of mulch around the garden, I basically tossed anything that might be damaged by frost into the greenhouse, including my collections of Andean tubers and American groundnuts, assorted herbs, shrub cuttings, a few flowers, and tree starts – basically anything I didn’t want frozen solid in a pot. Also several containers of potting soil that I didn’t want saturated with oncoming rains. It was a lot.

The greenhouse, however, was still full of summer plants. The passion vines, tomatoes, ashwagandha, and a couple of volunteer mashua vines, in particular, had firmly established their dominance in their respective corners.  And then there were basils, lemon verbena, Thai eggplant, and an assortment of cacti, more cuttings, and pots of seeds still hoping to germinate (or so I thought). Shelves and walkways were soon crowded.

Ok – truth be told – it was utterly impossible to even get in there, much less walk around.

It is interesting how no matter how large the space, I can manage to fill it. I mean, why do I even have all these cacti? They are an interesting plant. Some might even have psychotropic properties. They are impractical, but I can’t just throw them out in the cold. And seriously, Spider Plants? They seemed to add a tropical touch at the time. They were dying in the house, where I never remembered to water them. True, the 14’x16’ Solexx-covered mansion was a big step up from the 2’x2’ thing that used to blow over in a strong wind and take my seedlings with it – but I was now seriously questioning whether the upscale version might have shrunk in all that summer heat.

Clearly, some greenhouse organization was in order

Lesson: The greenhouse is always in a state of transition, so the key to greenhouse management – whether large or small – is in anticipating these changes and organizing and preparing accordingly. [Duh.] ~by Yours Truly

Step 1: Take an Inventory So You Know What You’re Up Against. Organize by Categories:

Realization: Categorizing the plants revealed I had over 30 pots of Andean tubers, over a dozen oak trees sprouted from acorns, 10 quince started from seed, and a good 2 dozen assorted herbs. Most of the plants are fairly cold hardy; they just need a little extra protection until they get bigger. Also, many of the herbs would survive fine in the ground outside, but I like being able to move them into the greenhouse in winter where they can still be harvested.

The Marie Kondo Approach: What sparks joy here? The “removing stuff” task is not always about letting go or admitting failure; it is also about evaluating what works – or not. It’s about efficiency, cleaning out, and making things look more tidy – and making room for artistic expression (which brings joy!) However, Marie Kondo, I am not. I have a very difficult time throwing things away. I hate waste (and especially adding to landfills). What is taken out still needs to go somewhere – so sometimes the simple task of removal turns into a larger task of cleaning out or creating another area in which to store something, which might lead to doing the same somewhere else, and so on. If I stick with it, the whole place will eventually be organized and then I can start over. Or – just stop – come to terms with the fact that you have too much stuff. “You” meaning me, of course.

Tomato Vines: I cut out the tomatoes in stages to give some of the final cherry tomatoes a chance to sweeten up, but the great majority of them were now destined for the compost. We were really tomato-saturated this year. The plants, although productive, were dense and caused a lot of problems, which I will write about in a future post. I will need to learn to be more ruthless in the future. When they first come on, they are such an exotic treat; but for now, I am so done with tomatoes.

Mashua Vines: These were a surprise, growing up from beneath a large pot. I am thankful, because I thought I had lost my entire crop except for a few bulbs in pots. The vines grew quite tall, up and over the shelves on the east wall and up to the ceiling – and now they were blooming! Beautiful bright orange sweet little honeysuckle-like blooms, and I so wish the hummingbirds could find them! Clearly, these needed a designated space in which they could thrive. I removed the pot that was crushing them, harvested a large bowl full of roots, and then built a bed around the remaining plants. So much better.

Mobility Issues: Not everything can be moved around. Configuring the greenhouse to accommodate both potted and in-the-ground plants has always been a bit of a dilemma for me. My plants do best where they can spread out their roots, take advantage of microbial communities, and escape my tendency to overwater everything; however, a whole lot of the greenhouse is filled with potted plants that are always coming and going, depending on the season. These are seedlings, cuttings, and plants that need protection either from cold or small mammals.  Speaking of,

Rodents: Lo and behold, when I wasn’t looking, a rather large rat built a nest above head high in the passion vines. I saw the vines quiver slightly when I walked in one day, and suddenly there she was, staring at me. She scrambled up to the top of the rafters and stayed very still. I don’t blame her for seeking out a warm place for winter, but raising a family here was unacceptable, and we undoubtedly both highly valued the passion fruits, Andean tubers, and saffron bulbs, which I quickly covered with metal screens. She would have to go.

I cut back some of the passion vines (the vines die back with the cooler weather, anyway), not disturbing the nest, and gave her a chance to leave. I cut back a few more the next day, and then even more the next. I harvested numerous fruits in the process (We have plenty of seeds!) These are the Maypop variety, which are hardier than the tropical fruit variety. They might be able to survive outside, but the wall of vines and abundant flowers in the greenhouse have been spectacularly exotic. The rat did not like all the commotion and left on her own accord. Maybe it was my singing?

My ramps have sprouted in the plastic bags that I stashed in there over a year ago. I cannot believe it!  Previously, a single seed germinated, which I carefully transplanted. The next day, I came out to see it beginning a growth spurt only to find its head had been bitten off, probably by a roly poly pillbug or slug. There aren’t many of those around at this time of year (I am keeping an eye out for slugs, though). Just goes to show – don’t give up on some of the slow germinators!

Success! I am amazed I can walk in here! Everything is organized to where I can access what we need and move things out when the temps warm up in early spring. I could probably start a small salad garden (certainly some microgreens!) and I even have shelf space for adding trays of seeds! Longer days are just around the corner. And when the weather outside is frightful, the greenhouse is my favorite place to get my gardening fix. It was in the 50s in there in late-December. That’s almost balmy! 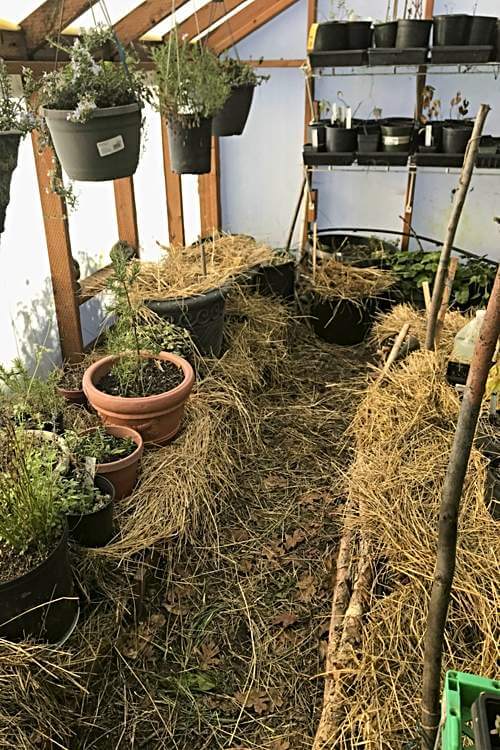 Greenhouse organization success! I can walk in here! We have a path! 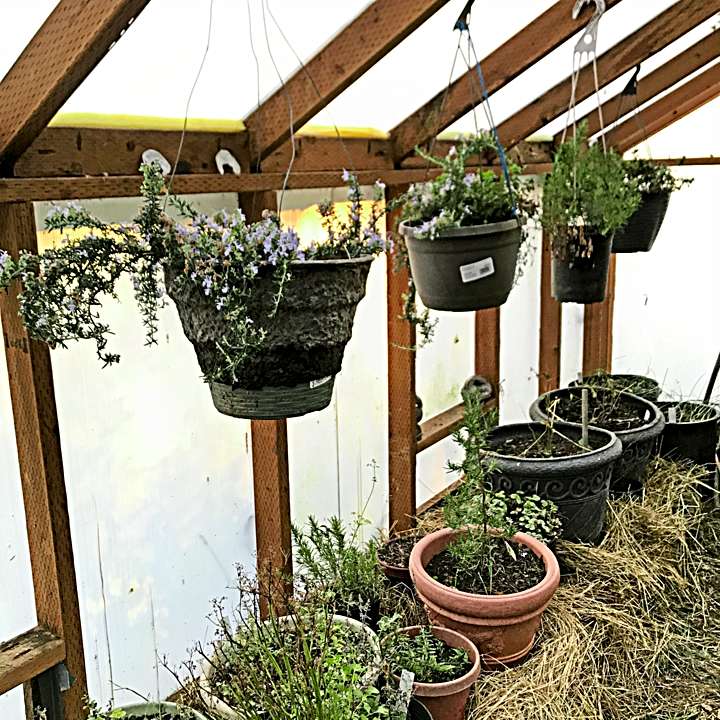 Greenhouse organization: group herbs in pots in bed and mulch with straw; hang whatever you can from the rafters. This added some space! Love the Solexx! Better insulated and provides a diffused light. 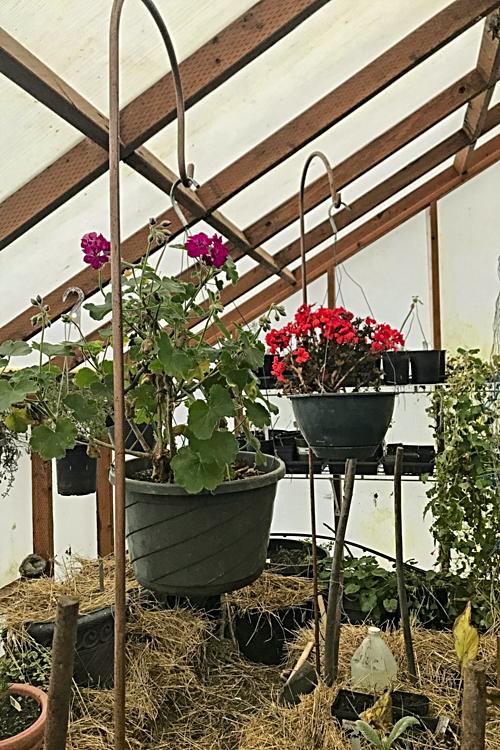 Geraniums add a lot of color and cheer, so I hung them up out of the way. You can see the diffused light created by the Solexx. 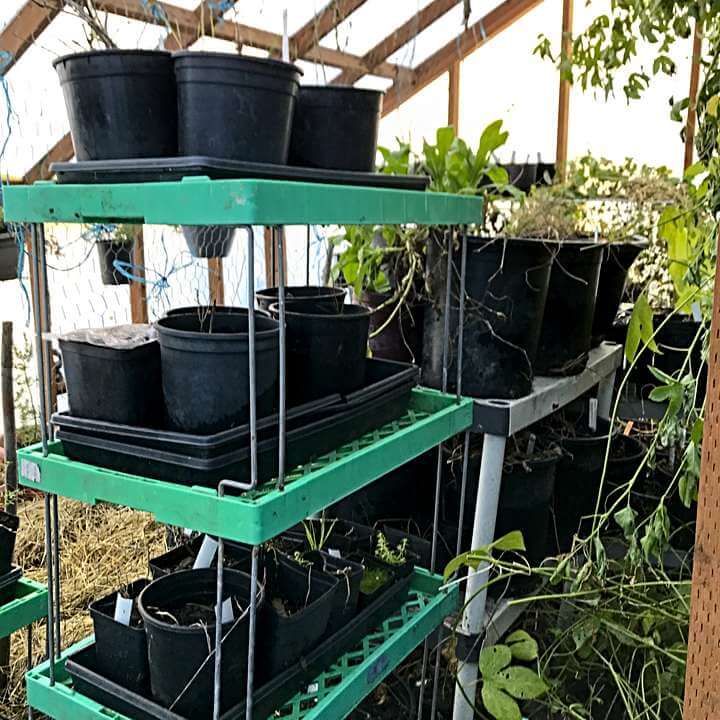 In greenhouse organization, stacking plants on shelves can add a lot of extra space, especially during winter months when plants are more dormant.

Plants Moved into the House