AKA: Rescuing the Old, the Warped, and the Neglected in Your Orchard (we’re talking about fruit trees here) 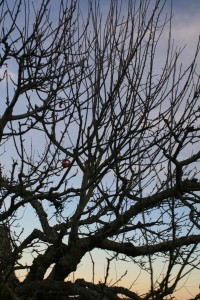 Ok. I admit to having a certain level of pruning phobia. Cutting is just so drastic. So life-changing. So controlling. There is so much potential to do wrong.

But I have come to realize that pruning is one of the most gratifying parts of gardening. It is something you do for the love of your tree, encouraging it to be all that it can be — a simple thing to give it strength and vitality — an opportunity to shape it into a living, breathing thing of beauty. Ah yes.

It’s simple, really. Trees are generally grown by 4 philosophical mindsets, in order of our desire to control:

I like the latter (#4) idea. It sounds like a lot less work. Maybe you don’t get the biggest fruit in the world and maybe you can’t reach all of it. And hey, maybe those aren’t the objectives.

But here’s our situation: we have 5 very old apple trees – 4 of which are a wonderful tart-sweet heirloom Gravenstein. I think the original intention was the “open center” method, but they have at times been sorely neglected and at other times just pruned willy-nilly by people who didn’t know what they were doing. (Ahm.) They keep producing, despite their twisted deformed shapes. There is no amount of pruning that will totally correct the past at this point, but I cannot in good conscience abandon them.

We have two philosophies of pruning in our family:

Obviously, these two mindsets are in direct conflict with one another, resulting in a tree that is even more contorted and confused and probably in need of psychological counseling.

Ah, but enough about me…. And Yes, we have contributed to the problem. So now what?

Time to Take Action! (But what action to take is the question!)

Obviously, suckers will take energy from the tree, so it is good to remove them when you see them – and you can do this at any time of year with great benefit to the tree. I actually did this to one of our trees. The early pruning opened it up to more sunshine and let the air flow through. The tree loved it. It gave me much joy. And my workload now is less. It always feels good when you do something right for a change.

However, for the great majority of pruning, the proper time is right about now, while the tree sleeps. You just sneak up on it in broad daylight when it’s still cold and before the tree starts budding out.

Tools. There is a product out there called “Sucker Stopper,” and I’m not saying I advocate it, because I can’t pronounce napthaleneacetate, and anything that claims to be a plant-growth regulator is highly suspicious in my book, as is anything that requires its own Material Safety Data Sheet. However, a “Sucker Stopper” is kind of an interesting concept on a lot of different levels, and might have been quite useful in my previous life. In my opinion, though, spend your money instead on a good pair of pruning shears and maybe a small saw (I love my Felco F-6 Classic Pruner For Smaller Hands and my Felco F-600 Classic Folding Saw with Pull-Stroke Action, which, in my opinion are the best and have really saved some wear and tear on my hands!).

Philosophically speaking, the whole pruning concept is not difficult to understand: help the tree to more easily bear fruit, which is what it is designed to do anyway by forces far greater than we. All you have to do is take out diseased and broken limbs, let in the light, and allow the tree to breathe.

Humans, however, have an uncanny ability to make things overly complicated and otherwise screw things up. And, Um…that would be me. So to further explain…

There are only 2 basic kinds of cuts. (How hard can it be?)

A “thinning cut” takes out an entire branch. They are good for opening things up, i.e., letting in air and light and encouraging outward growth. Make these flat across the main limb, or if it’s a large branch, just outside the collar.

A “head cut” cuts off the end of the branch, which stimulates branching of the buds behind the cut (so pay attention to the direction of the bud left at the tip after you cut! You want it to point outward). If a head cut is made back to a branch, it will stimulate growth in that branch’s direction. A head cut will also help stiffen the limb. Make these cuts at an angle to shed water.

Where does the fruit grow? Keep in mind that fruit will form for many years on the spurs on older wood – so don’t break off all those little nubbins. By making head cuts, the energy is directed more towards that older growth. That said, also keep in mind that after awhile, those old spurs tend to get old and wear out – as do we all – and so you need to encourage the tree to produce new spurs as well. New growth will carry future year’s apples (apples, cherries, pears, and plums fruit on 2- to 3-year old wood; peaches, nectarines, and figs, though, fruit on 1-year old wood) – so even though it’s tempting to whack everything back to a manageable size and width, don’t cut off all the new growth.

So – without further ado – the 5-stroke approach to tree pruning:

Perspective: When in doubt, step back and look. Problem branches don’t support your vision of the shape of the tree. They don’t do anything besides hog light and nutrients. Take out anything that crowds, overly competes, or limits air flow. Open up the center to let the sunshine in – thin to let the tree breathe – take more out of the top to let light in to the bottom (and control height).

Look at it this way. Vertical branches are often suckers that were allowed to get oversized. They don’t produce fruit. They tend to be excessively vigorous, meaning they have the longest shoots out where you will never reach. Branches that come out at narrow angles develop weak crotches.  We don’t like weak crotches. By the same token, when it comes to fruit trees, branches rubbing against each other will not create more fruit. Take out the cross-overs. “Problem” branches are more susceptible to wind damage and can splinter, break, and bleed under the weight of the fruit, and then the insects and borers move in, and then you have real problems. Don’t put your tree (and yourself) through that agony. Remember, too, your human friends. Long thin branches can break from heavy fruit, true, but they also tend to whack people in the head who forget to duck (dang those young whipper snappers!). General rule of thumb is to cut back no more than one third of the overall tree and no more than 20% of the new growth, a rule that is, I am sure, frequently broken. 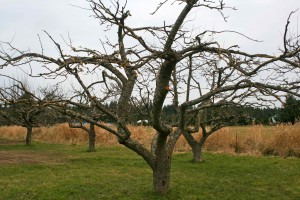 Is there anything left? If, like me, you pruned the living dweedle out of your tree last year in an attempt to impose some form of structure and reform, you were rewarded with an over-stimulated response which in other life forms might be considered exciting, but in the case of a tree meant a superfluity of water sprouts, jumping out of last year’s cuts like a fountain of willow whips.

“Gramma! Get down from there before you fall!” This role reversal would have been more amusing had I not realized I had climbed our old tree only to find myself in a rat’s nest of overgrowth and that it was not only the tree that was a bit out of balance. But I also realized up there that if you think like a powerful old godfather of a tree with an extensive root system, and someone comes along and takes away your food-making supply (i.e., the leaves), that your underground support is going to send a lot of energy up above to fight back. Yo. It’s survival mode.

I sat back for a moment and looked around me. I could almost feel the trees tremble and hear them whisper to each other, “Here she comes with the saw.” The setting sun was turning the sky into pastels. Maybe it was time to call it a day. There is always next year, and if we’re lucky, a year after that.

Trees – ya gotta love em. They teach us so much. They quietly put up with our abuse and, regardless of whatever hardships come their way, keep on reaching for the sun.