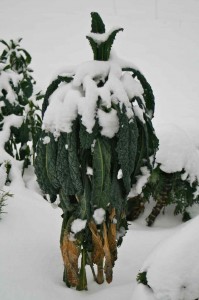 I had one of those “what can I possibly make for dinner” moments the other night, which usually results in a last-minute scramble of some sort. There was a head of cauliflower that needed to be eaten, some bone broth, and a couple of chicken breasts in the freezer – a good start, but boring. I went out to the garden, mostly to inspect the damage, and also to see whether there was anything I could salvage.

To fill people in who don’t live in the Pacific Northwest: we’ve had three days of some of the heaviest snow we’ve seen in decades, followed by rain and freezing temps that left everything encased in ice.  Yesterday, the wind hurled the rain against the windows. Branches of our old fir in the front yard flailed wildly about and I thought sure our old cherry tree was going to topple over. Little birds hunkered down beneath the feeder, while the eagles and gulls raced each other across the sky.

So – you can imagine my surprise when I found my kale plants standing defiantly strong against the onslaught of weather. “Mother Nature – bring it ON!” 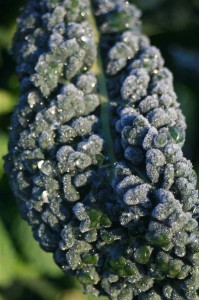 My favorite amongst the kales is the Italian Lacinato. Seriously, this plant can grow to tree-like status in the veggie world. It’s amazingly beautiful, with dark green, deeply crinkled leaves, statuesque, even prehistoric – and it is, in fact, a very ancient plant. Nearby, also poking up from the melting snow, a young rosemary.  It seemed like a natural fit. I picked some of both.

I love eating with the seasons and harvesting what I can from the garden, but I have to admit, I could be more efficient in the winter-gardening department. I’m not sure any plastic tunnel would have held up under the weather we’ve had, though, so I’m grateful for something that can hold its own under harsh weather.

Still, in the dead of winter (which, looking at my garden, is an appropriate expression), some might be heard to say, “Oh no. Chard and kale. Again.”

That person, however, would not be me. I love kale. My favorite way of cooking it is in a Polish soup with a rich broth, assorted root vegetables, beans, and sausage. It’s also really good simply steamed with a little garlic & fried bacon thrown in and a splash of vinegar. Or you could sauté it with a lot of garlic and then toss it with a little olive oil, parsley, and red pepper flakes into penne pasta, topped with Romano cheese, like my friend, Walt, the beekeeper, does (I’ll share his recipe soon).

But I didn’t have these things tonight, and what I ended up with was a sloshy stir-fry that was actually quite good. I was inspired by a recipe I found at the Unrefined Kitchen. I was intrigued by the idea of “cauliflower rice” – especially since we are trying to limit grains and gluten in our diet – so here is my variation: 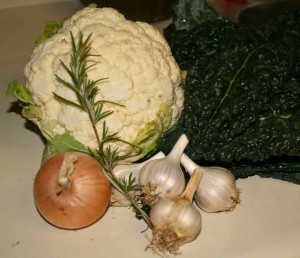 Basically, just sauté a little onion with cut-up pieces of a couple of chicken breasts. After the mixture is browned and cooked through, add a little bone broth thickened with arrowroot to make a thin gravy. In another pan, lightly steam cut-up chunks of cauliflower in bone broth or stock. Blast a couple of times with an immersion (or other) blender to make it “rice-like.” While this is going on, chop your garlic and set aside. Cut 6-8 leaves of kale in thin strips and toss it in with the chicken. Right at the end, add the chopped garlic, a little minced rosemary, and the cauliflower “rice.” Give it a stir or two. Top the servings with a little cheese (we used Asiago). 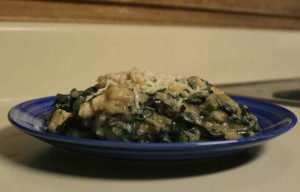 I could live on this. Quite well, in fact.

Kale: If you layer the leaves of the kale and roll them up like a cigar, it is easy to slice into narrow strips and then cross slice. Kale doesn’t have the water content of spinach, so it doesn’t reduce quite as much – and that’s why it’s helpful to add a little extra broth to the mix – how much depends on how gravy-like you like it.

Cauliflower: I admit, ours did not turn out as “rice”-like as that described in Unrefined Kitchen. Perhaps I oversteamed it a bit. The blender quickly turned it to thick mush. No matter. Still good. But it made the whole casserole more stew-like. In fact, this would be a good way to add a flavorful “sauce” to other dishes.

Arrowroot: If you haven’t used arrowroot, give it a try. Cornstarch also works, but it might be difficult to find some that is GMO-free. Arrowroot thickens at a lower temp and you can use a little less. Plus, it’s gluten-free (as opposed to thickening with flour). Like cornstarch, it needs to be mixed with a little cold liquid first.

Garlic: I used 2 small bulbs (about 1.75” diameter) (9 cloves) of German Extra Hardy. This Porcelain variety can easily get nearly twice that size. It is known for having just a few large, plump cloves per bulb, a strong garlic flavor, and a high allicin content. At this time of year, the hardneck bulbs are reaching the end of their shelf life, so they need to be eaten. The smaller bulbs seem to keep longer, so I save them for last. I don’t “mince” the garlic too small – I like to bite into a piece of it now and then. I just smash the cloves with the flat side of a meat tenderizer and then chop it coarsely (yes, you can lay the flat side of a knife on a clove and hit it with your hand – but I prefer to minimize the beatings to my hands). Letting it sit a bit (all it takes is a minute or less) before adding it to the rest of the food gives time for the allicin in the garlic to form and other chemical reactions to take place that develop flavor and increase health benefits. Allicin is destroyed by heat, so to preserve flavor, add chopped garlic to the food at the very last minute, giving it just enough time to heat up and for the flavors to distribute.

Rosemary: Strip the narrow leaves from the rosemary, chop fine, and add it at the last minute with the garlic. Again, you don’t want those volatile oils to just evaporate. I love the woodsy smell of rosemary, but it’s easy to do too much – so go lightly.

Cheese: not a necessity, but it sure adds another dimension of flavor to the overall dish. We used what we happened to have.

About Growing Kale & Dealing with Aphids:

If I were to pick a power food for Northwest gardens, I think it would have to be kale. The Lacinato does so well for me, I don’t think I’ll even bother with the other varieties next year, which were more prone to aphid infestations and tend to turn tough and bitter with age. Some people plant kale in spring and then again in fall. Me, I just keep with the spring plant. I’m too busy with the garlic in late summer, and it is hard to get new plants going during our hot, dry time when we have little rainfall, lots of wind, and when the bugs are in full force.

Like other brassicas, the kales are nutrient hogs – and they are prone to aphids – so you have to decide whether the effort and resources are worth it. To me, they are. You don’t need many plants to give you plenty of food. A larger plant (i.e., one started in spring) seems to have a little more resilience against the aphid onslaught. Ants will farm them – so if you have aphids, you probably have double trouble. Ladybugs feast on aphids, but never enough to get rid of them. My solution has been to spray the little bast**ds with a strong force water – but then, you have to wonder, where do they go and where do they attack next? I’ve also tried soap, nicotine, garlic, and oil sprays – but then, you don’t want to harm the good bugs that are trying to help in the war effort. I’ve also tried planting wormwood in the vicinity, which also seems to help. I even smash them into glue between my fingers. No one method, though, completely solves the problem. A combination of counterattacks is usually the best strategy. Plus, it’s usually not the whole crop that gets infested – only plants here and there. By growing a little extra, you can afford to sacrifice a few if you need to. If you can get the plants through the summer to after frost, Mother Nature will solve your insect problem for you. Plus, after frost is when kale comes into its prime.

If you’re looking for a good source for seeds, I can very highly recommend Renee’s Garden, a company that specializes in heirloom varieties of veggies, herbs, and flowers. Renee Shepherd is always on the lookout for unique and quality seeds; they are strong supporters of sustainable farming practices; and they donate seeds all over the world in a variety of outreach programs. It truly is a small company making a huge difference, and I can’t say enough good things about them! (And no – I’m not an affiliate – I’ve just had some outstanding results with their seeds. Good seed definitely matters!) Non-GMO – of course.

Are you a fan of Dr. Weil? He, too, loves kale. Kale is a nutritional powerhouse of vitamins A, C, and K, the organosulphur compounds that have been linked to cancer prevention, calcium, and folic acid. You can read more about kale in Dr. Weil’s garden here.

Need garlic? I still have some German Extra Hardy and Polish White left. Shoot me an email, head over to the garlic page, and/or stop by the house if you’re in the neighborhood.